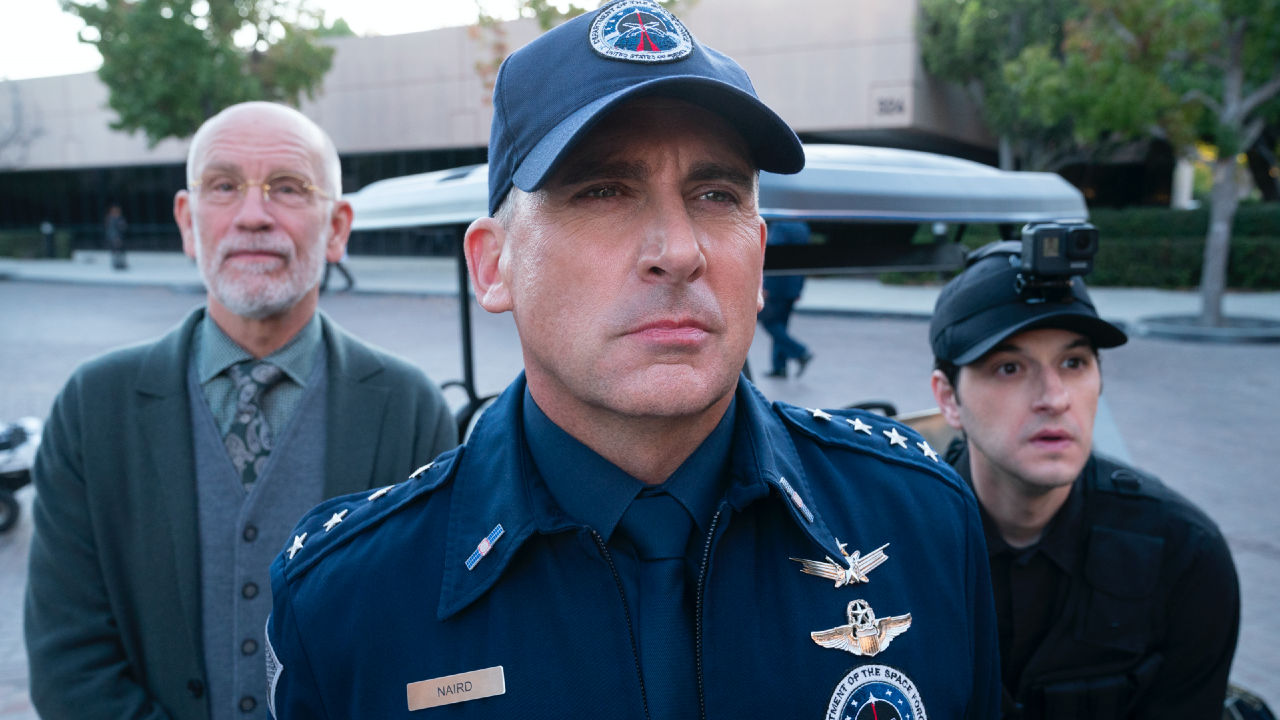 The following is a mostly spoiler-free review for all 10 episodes of Space Force Season 1, which is now streaming on Netflix.From Steve Carell and Greg Daniels (co-creator of The Office and Parks and Recreation) comes a “ripped from the heinous headlines” comedy about the 2019 initiative that simultaneously amused and terrified us all: Space Force. And like the idea of Space Force itself, the series is a muddled misfire, clumping together disparate tones and styles that don’t mesh well or complement each other. There are occasional moments of charm and leads Carell and John Malkovich (who create a power duo you never knew you wanted to see, until now) do a heck of a job anchoring the madness, but Space Force is underserved by its placement on Netflix. It’s a TV series, sure, but one without the usual benefit of a mid-season course correction. Because Space Force had to be served up like a finished movie, there was no point at which Daniels, Carell, Office EP/writer Paul Lieberstein, or any other member of the creative process could have taken a step back to analyze and/or streamline the decision to bounce back and forth between rapid-fire foul-mouthed satire (like Veep), a more restrained and traditional workplace comedy, and a family drama.

Within these different tonal bubbles, there are some cute and worthwhile moments, but none of them mix well together. The war room element features a round table of cartoonish lugheads (Noah Emmerich, Jane Lynch, Diedrich Bader, Patrick Warburton, and Veep’s Dan Bakkedahl) while the Space Force base contains characters who feel more grounded and natural. It’s a facility mostly full of comedy “straight men/women” who do nothing but react to the (off-screen) president’s absurd whims and the ridiculous caricature of Astro-political policies. In that regard, this is where Space Force feels the most like The Office, which itself featured a collision of characters who varied greatly in nuance.

The other co-creator of The Office and Parks and Rec, Mike Schur, has continued to create some of the absolute best “feel good” ensemble comedies of the last decade with Brooklyn Nine-Nine and The Good Place and yet all of those shows were allowed to evolve into greatness because of the nature of network TV production. Elements and characters could be tweaked over time to play to the performers’ strengths. All four shows all started off okay and then were purposefully crafted into something extraordinary. From this first season of Space Force, it’s clear that Daniels and Carell are intent on keeping the darker edge that The Office had. But Netflix’s model doesn’t allow for growth that’s honed over the course of several episodes – it’s a flawed delivery system. And oftentimes we wind up with a show, like Space Force, that’s well-meaning, and from talented people, but messy and undercooked.

It also takes a few episodes to get used to Carell’s performance as General Mark Naird, as he’s resorting to a gruff, affected voice for a character more in line with the strait-laced goof he played back in 2008’s Get Smart. By the time we get to the fourth episode, “Lunar Habitat,” where Mark volunteers to replace someone in the final week of an isolated biosphere experiment, the character starts to feel more layered and real as a man unequipped to search within himself and reckon with his emotions. In fact, Mark’s overall decency, and love for his family — Lisa Kudrow’s incarcerated wife Maggie and Diana Silvers’s adrift teen Erin (who’s not crazy about having to move from D.C. to Wild Horse, Colorado) — winds up being more of a draw than the three-ring circus aspects of the show. Mark, like the series itself, finds himself pulled in many different directions as he’s torn between his collapsing home life and the abject lunacy of the lunar endeavors.

Malkovich, while still playing things as if he’s in a drama for the most part (because Malkovich), is given some wonderful material to chew on as Dr. Adrian Mallory, the program’s chief civilian scientist. When Space Force finds itself “at ease” every so often, he and Carell shine nicely. About three episodes in, with “Mark and Mallory Go to Washington,” the series seems to decide that Space Force, as a concept, is one that should both be ridiculed and revered. It’s farcical, yes, but because Mark is determined to make the best of his new post as its leader, he’s going to uncover and reveal its heart. Because of this, and Mark’s usual tendency to do what’s right, he and Mallory weather several storms together.

And in case you were wondering if this particular workplace comedy had its own “Jim and Pam” – the answer is yes. Tawny Newsome’s pilot Angela and Jimmy O. Yang’s scientist Chen, away from the screwball antics of the higher-ups, are able to form a close bond that’s slowly blossoming into something more. The guest stars here are top-of-the-line, as you’d expect, including Fred Willard in his final TV performance. Overall, Space Force’s ingredients feel right, but they’re not in proper proportion. The Veep-style elements clash tremendously with the heartwarming aspects, and the end result is a noble fumble. Here’s hoping a prospective Season 2 manages to course-correct, as The Office and Parks and Rec did after their own rocky launches.

Though Space Force finds a surer footing as the season progresses, it’s still unable to decide what kind of comedy, or dramedy, it wants to be. And when every incongruous element of the series corners our heroes at the end (for a cliffhanger, no less), it doesn’t feel like the show’s on the right course. There are genuine pockets of hilarity and warmth to be found, often in their own standout bubbles, but nothing quite fits together the way you’d expect from a team of pros with plenty of comedy hits under their belts.