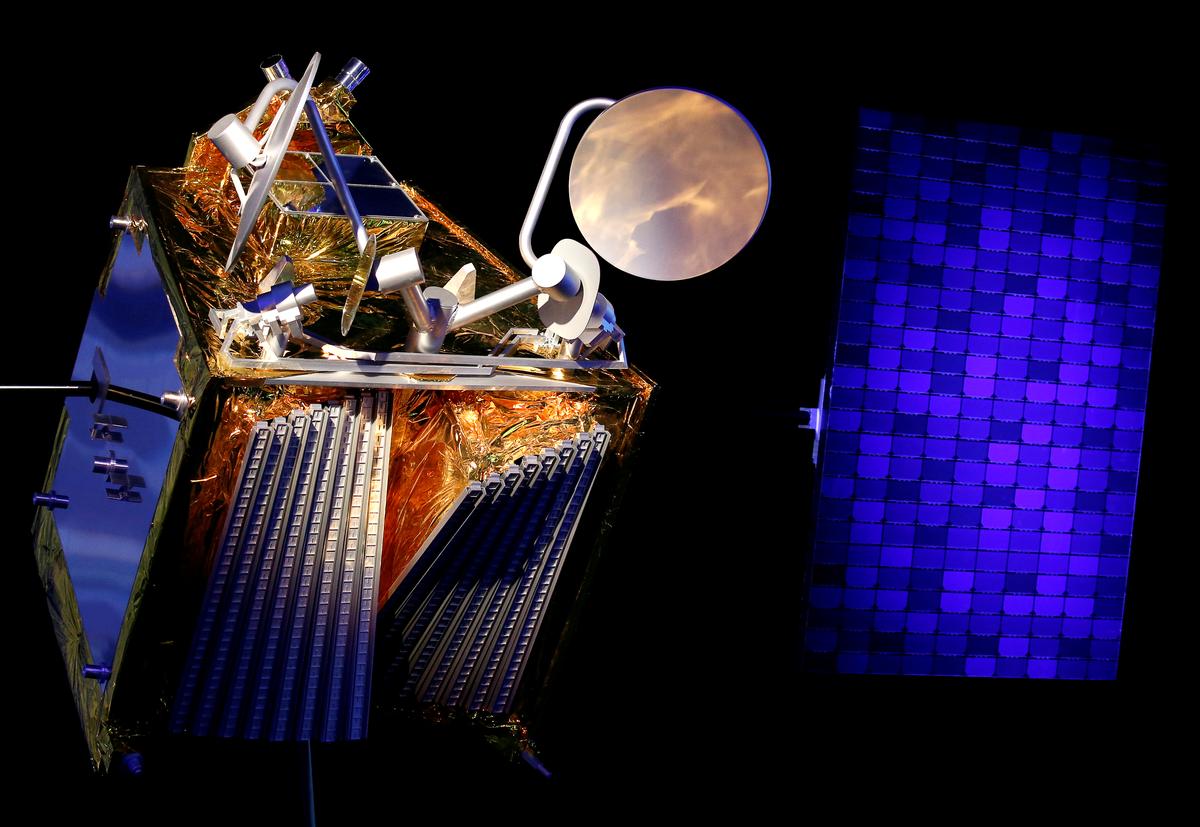 TOKYO (Reuters) – Britain is betting that satellite operator OneWeb will help it boldly go into a post-Brexit era. But it faces formidable challenges to complete a working constellation and rebuild a collapsed venture that has proved a money pit for investors.

FILE PHOTO: A scale model of an Airbus OneWeb satellite and its solar panel are pictured as Airbus announces annual results in Blagnac, near Toulouse, France February 14, 2019. REUTERS/Regis Duvignau/File Photo

The British government and Indian telecoms conglomerate Bharti Enterprises said last week they would together put up $1 billion to buy OneWeb, which filed for bankruptcy after its biggest backer, SoftBank Group, declined to provide fresh funding.

The deal offers a new lease of life for the venture, which was founded by U.S. entrepreneur Greg Wyler with the vision of providing “internet everywhere for everyone” via 648 low Earth orbit satellites.

OneWeb, which began as WorldVu in 2012, has 74 satellites already in orbit, as it ramped up launches immediately before collapsing in late March.

Britain is looking at adding positioning technology to new satellites to complement and add resilience to the American GPS system, two sources with knowledge of the matter said, after the country exited the EU’s Galileo network as a result of Brexit.

That secondary payload could be built in Britain, the sources said. The idea of providing internet services for remote regions is also attractive to the government.

Additional investment, potentially running to more than $1 billion – on top of the $1 billion British/Bharti commitment – would be needed to complete a constellation that can offer continuous service worldwide, the sources said.

The satellites, which have a lifespan of about five years and are assembled in a highly automated factory run with Airbus, cost in the region of $1 million each, the sources said.

The rocket launches have run to around $70 million apiece, the sources said, carrying 34 satellites into orbit each time.

With a smaller number of launches pushing the number of satellites towards 200, OneWeb could begin providing coverage at the poles, with the military and oil and gas industry seen as potential customers in the Arctic, according to the sources.

“Getting the future commercialization right for OneWeb will be absolutely key,” said Campbell Macfarlane, former president of OneWeb’s enterprise division who left following the bankruptcy. He said it could prove “a very shrewd investment for the UK government”.

OneWeb has secured radio spectrum and regulatory approvals needed to operate its satellites and ground infrastructure and offer services around the world, documents filed with a bankruptcy court in New York show.

“This is the best beachfront property there ever was in space,” one of the sources said of the spectrum.

“OneWeb’s birthing is going to be enormously painful, but in the long run it can be very valuable.”

Providing universal internet service via satellite has been a dream of numerous tech tycoons and companies over the years, including a failed Bill Gates-backed venture called Teledesic in the 1990s.

Wyler originally brought his idea for what would become OneWeb to Google in 2013. Only a year later, he left Google to team up with Elon Musk’s SpaceX.

That partnership ended too and OneWeb went it alone.

Wyler formed a tight bond with SoftBank CEO Masayoshi Son who feted him on-stage in Tokyo in 2017 as part of his broader vision, with OneWeb aligning with SoftBank’s corporate philosophy of “information revolution – happiness for everyone”.

However the economics of universal internet service were daunting: it would be hard to charge consumers enough to defray the cost of launching and operating the satellites.

OneWeb was forced to step back from this grand idea and instead focus on a commercial customer base for such services, like airlines and cruise lines, willing to pay a premium.

The venture was hampered by costly contracts involving its own investors, four sources said.

In 2015 it signed a long launch contract with Arianespace, majority-owned by a joint venture of Airbus and Safran, locking in prices even as SpaceX was shaking up market pricing in the industry.

Wyler himself was sidelined from day-to-day management as business pressures mounted, and the company cycled through three CEOs.

Wyler did not respond to a request for comment.

SoftBank was facing its own hard reckoning: a disastrous investment in office-sharing startup WeWork was cooling investor attitudes to money-losing ventures.

The coronavirus outbreak further undermined the business model of many of its biggest investments and hammered OneWeb’s biggest potential customers.

With SoftBank’s share price tumbling, the conglomerate pulled out of funding talks, collapsing the venture.

The acquisition of OneWeb, which is British and U.S.-based, is subject to approval from regulators including the Committee on Foreign Investment in the United States (CFIUS).

Its new owners will need to rebuild the company’s workforce after 90% of its staff were let go following the Chapter 11 filing.

FILE PHOTO: A solar panel of a scale model of an Airbus OneWeb satellite is pictured as Airbus announces annual results in Blagnac, near Toulouse, France February 14, 2019. REUTERS/Regis Duvignau/File Photo

Former OneWeb engineers that helped build and run the system have been hired by rival companies as competition for talent in the space industry heats up. A commercial team – vital if the company is to effectively sell its capacity and achieve profitability – will also need to be reconstituted.

It was unclear if Chief Executive Adrian Steckel, who the bankruptcy filings show was paid a $2.25 million retention payment on March 25, two days before OneWeb filed for Chapter 11, and Chief Financial Officer Thomas Whayne, who was paid $1 million on the same day, will continue to run the company after a takeover.

Steckel and Whayne did not respond to requests for comment.

Reporting by Sam Nussey in Tokyo and Kate Holton in London; Editing by Jonathan Weber and Pravin Char