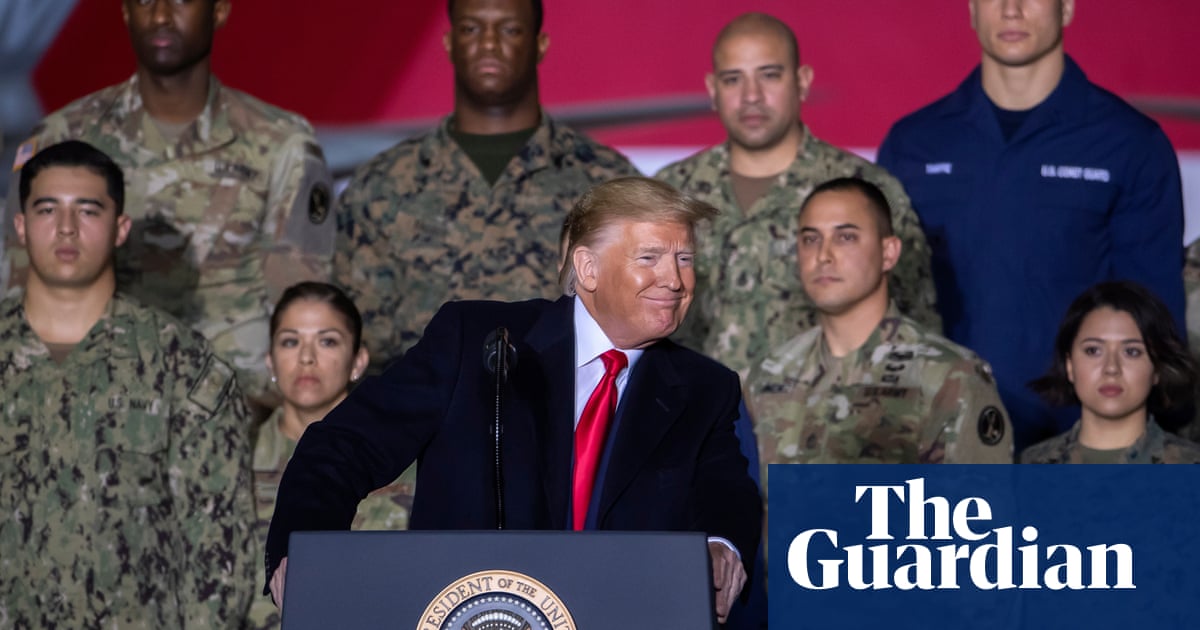 Donald Trump has launched space force, the first new US military service in more than 70 years.

In signing the 2020 National Defense Authorization Act that includes the force, Trump claimed a victory for one of his top national security priorities two days after being impeached by the House of Representatives.

It is part of a $1.4tn (£1.1tn) government spending package – including the Pentagon’s budget – that provides a steady stream of financing for Trump’s US-Mexico border fence and reverses unpopular and unworkable automatic spending cuts to defence and domestic programmes.

“Space is the world’s new war-fighting domain,” Trump said during a signing ceremony at Joint Base Andrews outside Washington. “Among grave threats to our national security, American superiority in space is absolutely vital. And we’re leading, but we’re not leading by enough, and very shortly we’ll be leading by a lot.”

Later on Friday, as he flew to his Florida resort aboard Air Force One, Trump signed legislation that will keep the entire government funded until 30 September.

Space force has been a reliable applause line at Trump’s political rallies, but for the military it is seen more soberly as an affirmation of the need to more effectively organise for the defence of US interests in space, especially satellites used for navigation and communication. The force is not designed or intended to put combat troops in space.

The defence secretary, Mark Esper, said: “Our reliance on space-based capabilities has grown dramatically, and today outer space has evolved into a warfighting domain of its own.” Maintaining dominance in space, he said, wwould now be space force’s mission.

Space has become increasingly important to the US economy and to everyday life. The global positioning system, for example, provides navigation services to the military as well as civilians. Its constellation of about two dozen orbiting satellites is operated by the 50th space wing from an operations centre at Schriever air force base in Colorado.

In a report last February, the Pentagon asserted that China and Russia had embarked on major efforts to develop technologies that could allow them to disrupt or destroy US and allied satellites in a crisis or conflict.

“The United States faces serious and growing challenges to its freedom to operate in space,” the report said.

When he publicly directed the Pentagon in June 2018 to begin working toward a space force, Trump spoke of the military space mission as part of a broader vision of achieving US dominance in space.

Trump got his Space Force, which many Democrats opposed, but it is not in the “separate but equal” design he wanted. Instead of being its own military department, like the navy, army and air force, it will be administered by the secretary of the air force.

The law requires that the four-star general who will lead the force, with the title of chief of space operations, will be a member of the joint chiefs of staff, but not in its first year. Trump said its leader would be air force Gen John W Raymond, the commander of US space command.

The space force is the first new military service since the air force was spun off from the army in 1947. It will be the provider of forces to US space command, a separate organisation established earlier this year as the overseer of the military’s space operations.

The division of responsibilities and assets between space force and space command has not been fully worked out.

Space force will be tiny compared with its sister services. It will initially have about 200 people and a first-year budget of $40m. The military’s largest service, the army, has about 480,000 active-duty soldiers and a budget of about $181bn. The Pentagon spends about $14bn a year on space operations, most of which is in the air force budget.

Kaitlyn Johnson, a space policy expert at the Center for Strategic and International Studies, sees the creation of the space force as an important move but doubts it will prove as momentous as Trump administration officials suggest.

The vice president, Mike Pence, has touted the force as “the next great chapter in the history of our armed forces.” And Esper earlier this week called this an “epic moment” in recent American military history.

Johnson says Democrats’ opposition to making it a separate branch of the military means it could be curtailed or even dissolved if a Democrat wins the White House next November.

“I think that’s a legitimate concern” for advocates, she said. “Just because it’s written into law doesn’t mean it can’t be unwritten,” she said, adding, “Because of the politics that have started to surround the space force, I worry that that could damage its impact before it even has time to sort itself out” within the wider military bureaucracy.

Some in Congress had been advocating for a space force before Trump entered the White House, but his push for legislation gave the proposal greater momentum.

In September he said it would “allow us to develop a cadre of warriors who are appropriately organised, trained and equipped to deter aggression and, if necessary, to fight and win in space.

“The next big fight may very well start in space, and the United States military must be ready.”