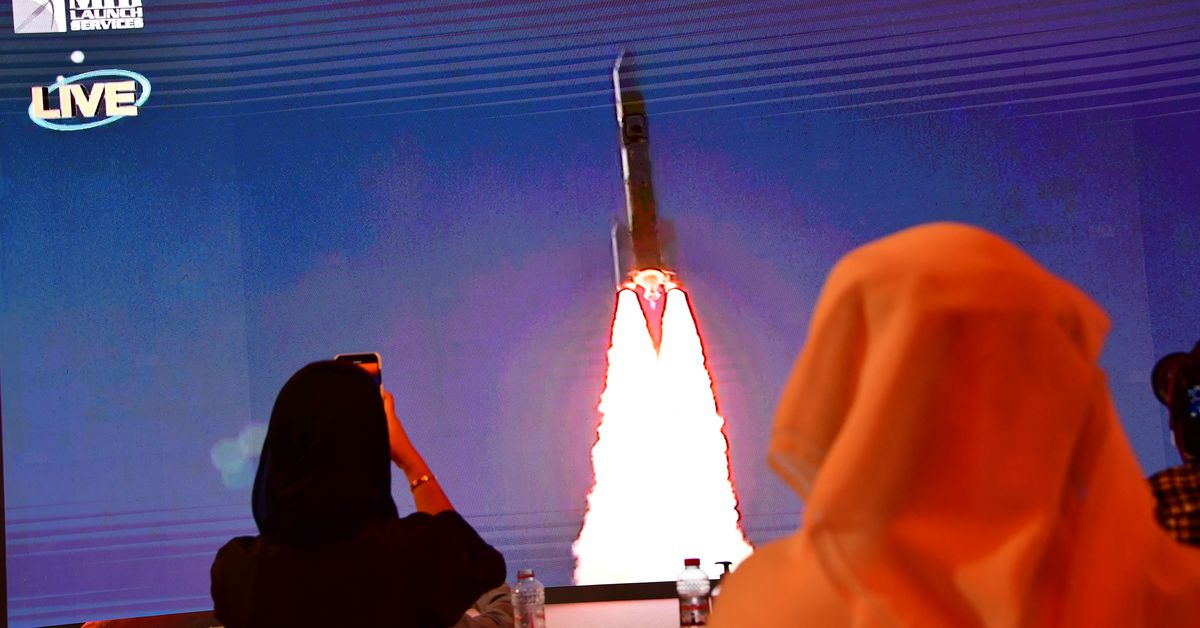 Hope is on its way to the Red Planet

A screen broadcasting the launch of the “Hope” Mars probe at the Mohammed Bin Rashid Space Center in Dubai.Photo by GIUSEPPE CACACE/AFP via Getty Images

Today, the United Arab Emirates’ first interplanetary mission successfully took off from the southern tip of Japan, sending up a car-sized probe bound for the planet Mars. The launch marks the beginning of the country’s most ambitious space project yet, aimed at studying the weather on Mars as it evolves throughout the planet’s year.

The spacecraft, called Hope, took off on top of a Japanese H-IIA rocket from Japan’s Tanegashima Space Center at 6:58AM at the launch site (or 5:58PM ET this afternoon on the East Coast of the US). The probe will now spend the next seven months traveling through deep space, periodically correcting its course with a series of engine burns. Then sometime in February of 2021, it’ll attempt to put itself into an elongated orbit around Mars, where it will analyze the atmosphere and climate throughout the course of each Martian day.

For the UAE, the timing of this launch was absolutely critical

For the UAE, the timing of this launch was absolutely critical. The UAE government conceived of this project in 2014 to inspire young Emirati teens, and as a bold way to celebrate the 50th anniversary of the nation’s founding in December 2021. To ensure that Hope is in orbit by the anniversary, the team behind the spacecraft had to launch this summer, during a small window when Earth and Mars come closest together during their orbits around the Sun. This planetary alignment happens once every 26 months, so the UAE team had to launch this year to meet the 2021 deadline.

So far the launch seems to have been a smooth one. For a few minutes after the spacecraft deployed from the rocket, engineers feared that the vehicle hadn’t opened one of its two solar panels. But the UAE eventually confirmed that both panels had been deployed. The mission team noted that they were in communication with the spacecraft and that Hope appeared to be in good shape. The engineers will continue to analyze data coming from the spacecraft and provide updates on the health of Hope in the coming hours.

But some in the UAE are already celebrating. “Years of hard work and dedication have paid off in a big way,” Yousef Al Otaiba, the United Arab Emirates ambassador to the United States, said during a livestream following the launch. “Thanks to the mission team efforts, the UAE’s first spacecraft, which six years ago was just a concept, just an idea, is now flying into space well on its way to another planet. This is a huge accomplishment. But it’s just the beginning.”

Getting to this point proved to be a particularly challenging process for the UAE, which only had experience launching Earth-observing satellites up until now. The engineers and scientists had just six years to get the probe ready for launch this year, and their government tasked them with building the spacecraft themselves — not buying it — within a set budget of $200 million for development and launch.

“Years of hard work and dedication have paid off in a big way.”

“The government was very clear to us about it: they wanted us to come up with a new model of executing such missions and delivering such missions,” Omran Sharaf, the project manager for the Emirates Mars Mission, said during a press conference ahead of the launch. “So they didn’t want something with a big, big budget. They wanted something to be delivered quick, fast, and something that we can share with the rest of the world, about how they can approach missions.”

The team behind the mission decided they ultimately didn’t want to go it alone. They partnered with various academic institutions in the United States, including the University of Colorado at Boulder, Arizona State University, and the University of California, Berkeley, all of which had experience designing instruments or equipment for deep space probes before. The partnership allowed the UAE team to build upon known spacecraft designs and to utilize existing testing infrastructure, as well as gain knowledge from experienced aerospace engineers.

Engineers at mission control in the Mohammed Bin Rashid Space Center in Dubai, monitoring the launch.Photo by GIUSEPPE CACACE/AFP via Getty Images

Today’s launch is a big win for the UAE and this new model for spacecraft development — but there’s still a long way to go before the country’s Mars mission is declared a success. In about a month, the engineers will do the first maneuver to correct Hope’s path to Mars. The vehicle will burn its onboard thrusters, slightly nudging the probe as it makes its way through space. A series of these maneuvers is needed to make sure Hope reaches the right location at Mars upon arrival. “It’s a very small target,” Pete Withnell, the program manager for the mission at the University Colorado Boulder, said during a press call ahead of the launch. “It’s equivalent to an archer hitting a two-millimeter target, one kilometer away. So this is not for the faint of heart.”

the biggest test of all will come in February

And the biggest test of all will come in February, when Hope must conduct a 30-minute burn of its thrusters to insert itself into orbit around Mars. The maneuver is meant to slow the spacecraft down from more than 75,000 miles an hour (121,000 km an hour) to more than 11,000 miles an hour (18,000 km an hour). The spacecraft will have to do this all on its own, without input from Earth. At that point, it will take too long to get a signal to Mars in time to make any corrections, so the burn must be completely autonomous.

That’s still a ways off, and for now, the UAE is celebrating a successful launch. If all goes well, the UAE’s launch should be the first of three missions to Mars that launch within the net month. Next up will likely be China, which is hoping to launch a Martian orbiter, a lander, and a rover to the Red Planet around July 23rd. After that is NASA, which is launching its Perseverance rover, designed to look for signs of past life and dig up samples that will potentially be returned to Earth in the next decade for study. All these groups are racing to launch while the planets are aligned, and time is running out to get them all off the ground.