Can You Solve Our Riddle of the Week?

This Modern Adirondack Is a Woodworking Challenge

We were hoping for an armed spaceship.

The U.S. Space Force has received its first offensive weapon system, but it may not be what you think. The “weapon” is actually a jammer capable of preventing adversaries from accessing their own military communications satellites. While that may not sound like much on the surface, it has huge implications for modern armed forces that rely on satellites to receive orders from home.

The Space Force’s 4th Space Control Squadron, based at Peterson Air Force Base, Colorado, received a Counter Communications System Block 10.2 system. The Pentagon described it in 2019 as a:

In other words CCS can be flown into a wartime theater on a military transport airplane and then turned on to cut off nearby enemy units from their own military communications satellites. It would cut adversaries off from their own satellite communications, including videoconferencing, and prevent them from receiving warnings of impending U.S. and allied missile strikes.

CCS, according to Space News, was originally introduced in 2004 and has been gradually updated to the latest Block 10.2 standard. The latest version can jam across a wider spectrum of radio frequencies than ever before. The system is used by the 4th Space Control Squadron as well as Air National Guard units in California, Colorado, Florida and Hawaii. 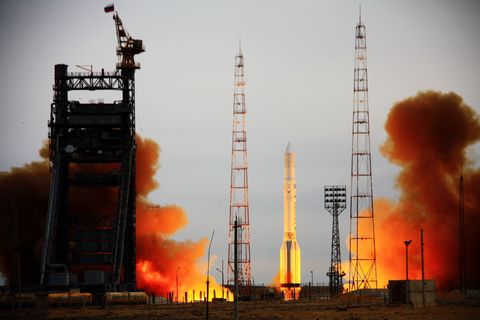 Most modern military forces rely on satellites to one extent or another, including communications. The obvious solution would be to shoot such satellites down, but the problem with military communications satellites is that they orbit much higher than other satellites, in order to cover a wider swathe of the surface of the Earth. Satellites in geostationary orbit circle the planet at an altitude of 22,236 miles or higher, making them difficult to reach. Instead of expending a lot of time and effort to develop a weapon to shoot down these satellites, it’s easier to simply jam their signal.

The CCS’s technical parameters are a closely held secret. The Secure World Foundation’s 2019 report Global Counterspace Capabilities, has this to say about the CCS system:

There is no public information on any technical characteristic of the CCS, such as frequency ranges, power levels and waveforms. However, it is reasonable to conclude that CCS can likely jam most of the major commercial frequencies (particularly C and Ku) and the most common military frequencies (X-band), with a possible capability in the increasingly popular Ka band. Also, it is likely that the CCS is targeted mainly at geostationary communications satellites (COMSATs), given that they are currently the primary source of satellite communications.

The report goes on to say that there were at least 13 CCS systems in operation as of 2017.

The U.S. is not the only country with satellite communications jamming capability. Russia employs the Tirada-2S “mobile satellite communications suppression complex.” Little is known about Tirada, but it is probably similar to CCS. A 2019 article at Russia’s TASS state news site makes a vague reference to it but offers no details. According to the U.S. Defense Intelligence Agency, China is developing satellite communications jammers but no specific systems have come to light. China will inevitably field such a system, as it would seriously degrade the capabilities of U.S. forces operating in the Western Pacific.