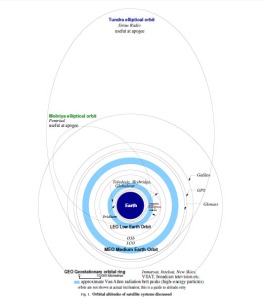 David Bowman G0MRF describes the coverage area that might be provided by an amateur radio Medium Earth Orbit (MEO) satellite (MEOSAT). He suggests there is a region of space that would be optimum for such satellites.

The Van Allen radiation belts are separated into two layers. The lower layer is comprised of high energy protons between 600 and 6000km. The second belt is essentially electrons and that occupies altitudes above 12,000km.  So a MEOSAT could avoid damaging radiation by orbiting in the “safe zone” between 7,000 and 11,000 km.

The paper Revisiting elliptical satellite orbits to enhance the O3b constellation by Lloyd Wood, Yuxuan Lou and Opeoluwa Olusola of the University of Surrey is now available for download.

Early low-orbiting satellites were launched into Highly Elliptical Orbits (HEO) as a result of not having much control over trajectory. Circular orbits with minimal eccentricity offer consistent altitudes, with the benefits of consistent free space losses and link budgets throughout the orbit, and soon became the norm. Highly elliptical orbits fell from favor for communications use.

Highly elliptical orbits can be used to provide targeted satellite coverage of locations at high latitudes. We review the history of use of these orbits for communication. How elliptical orbits can be used for broadband communication is outlined. We propose an addition of known elliptical orbits to the new equatorial O3b satellite constellation, extending O3b to cover high latitudes and the Earth’s poles. We simulate the O3b constellation and compare this to recent measurement of the first real Internet traffic across the newly deployed O3b network.

The orbits of satellites at altitudes above 2500 km can decay faster than might at first be expected. The Dash-2 satellite was a 1 kg 2.5 meter diameter balloon launched on July 19, 1963 with the West Ford Needles. The 3500 km orbit, originally circular, increased in eccentricity rapidly under the action of solar radiation pressure. Dash 2 reentered the Earth’s atmosphere less than 8 years later on April 12, 1971.

The AMSAT-UK International Space Colloquium is being held at the Holiday Inn, Guildford, GU2 7XZ on July 26-27, 2014. The event is open to all, further details at https://amsat-uk.org/colloquium/colloquium-2014/