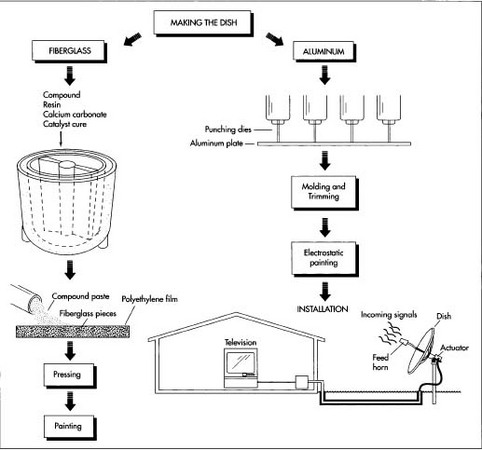 A satellite dish is a parabolic television antenna that receives signals from communication satellites in orbit around the earth. Its sole function is to provide the television viewer with a wider variety of channels.

The first communications satellite— Echo I —was launched by the United States in 1960, transmitting telephone signals. In 1961 Relay began transmitting television signals, and in the same year Syncom established itself as the first geosynchronous satellite capable of transmitting signals to one particular section of the earth’s surface continuously.

About that time personal satellite dish earth stations were selling for approximately $35,000 per unit. Taylor Howard, an employee at Stanford University who was well-versed in the usefulness of satellites as relayers of data, is credited with designing the first satellite dish for personal use. Howard’s dish, which was placed into operation on September 14, 1976, was made of aluminum mesh and was about 16 feet (5 meters) wide. By 1980,5,000 satellite dishes had been purchased for home use. In 1984 alone 500,000 were installed. Recent reports state that there are 3.7 million owners of home satellite dishes worldwide, and the number will continue to grow.

A typical commercial satellite dish of the 1970s was made of heavy fiberglass, and the dish itself, at its smallest size, had a diameter of about ten feet (three meters). Since then, satellite dish design has shifted toward light-weight, aluminum mesh dishes (similar to Howard’s homemade dish), some of which are inexpensive and small (three feet, or one meter, in diameter is typical), with many sections (petals) that can be easily assembled. England, Japan, and Germany, have led the way with direct broadcast TV, which sends signals directly to the viewer’s dish, but the United States has yet to do so. This trend would yield smaller, more affordable satellite dishes and regulated satellite programming.

The basic satellite dish consists of the following materials:

Satellite dishes for consumer use are not usually required to undergo rigorous tests with set standards, but some parameters are generally met. For example, so that the microwaves are received properly, the surface of the dish should be as smooth as possible and its parabolic shape should be exact. It must also be composed at least partially of metal, otherwise the microwaves will not reflect. If the dish is either mesh or perforated aluminum, the holes must be relatively tiny to minimize loss. Dish size is important; it should match that appropriate to the latitude. The mount should be sturdy, and the dish aligned properly for maximum reception.

Members and joints are tested and compared to the American Steel Construction Institute or the American Aluminum Association methods rules, whichever apply. The satellite dish should be built to withstand high winds, snow, ice, rain, and extreme temperatures.

After the dish is installed, the owner is generally responsible for cleaning it twice a year, more if necessary, tightening and lubricating all bolts once a year, and trimming obstructive weeds and trees from around it. In rare occasions, the owner must adjust the alignment to correct bad reception.

Some experts see the growth of satellite television as a revolution that is less concerned with crystal clear images of old sitcoms than with the possibilities of two-way communication that universal dish ownership would promote. Satellite television will be used to pay bills, shop, and participate in game shows. It can also be used to communicate over long distances, perhaps to play interactive video games with someone halfway across the continent. Some visionaries see the revolution as the return of one-on-one communication like that of a town meeting. In any case, it is almost certain that satellite television will continue to proliferate in upcoming years.

Manufacturers will continue to make smaller and less costly satellite dishes. Recently, for instance, 18-inch (45.7-centimeter) diameter dishes have been introduced into the market in Japan, Europe, and the United States. These dishes are small enough to fit on a windowsill or a porch railing. Manufacturers are also working on producing a flat-plate dish for satellite signal reception.

Where To Learn More