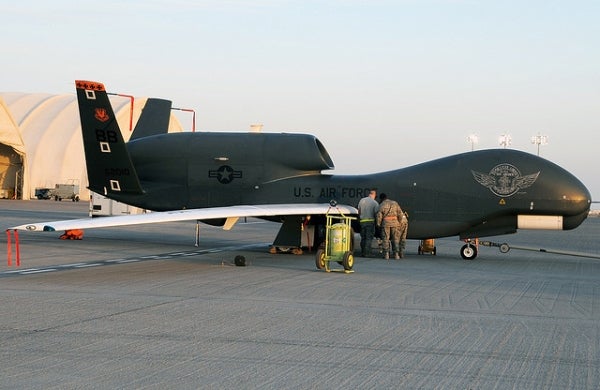 The Inmarsat-5 satellite will launch next month as part of the Global Xpress network – Photo courtesy of Inmarsat.

UAVs can create a huge amount of data, which takes up valuable satellite capacity – Photo courtesy of US Department of Defense.

Satellite bandwidth is fast becoming a prized commodity for the military – Photo courtesy of Boeing.

UAVs heavily rely on satellites for both visual and audio communications – Photo courtesy of Nasa.

Satellites can deliver assured communications for personnel in remote areas of the world – Photo courtesy of Missouri National Guard.

Effective communication on the battlefield has always been an integral part of conflict and fighting a decisive battle. Today, that means assured communications in remote areas of the world and across all domains. The modern soldier relies heavily on communications in order to stay connected on a networked battlefield and ultimately succeed in combat.

With the proliferation of 21st century technology such as unmanned aerial vehicles (UAV) and other intelligence, surveillance and reconnaissance (ISR) capabilities, the reliance on networked communications – both visual and audio – is increasing rapidly.

Networked capabilities translate into a growing reliance on satellite communications (SATCOM). That’s particularly true for the US, as its armed forces are deployed across the world and often in areas with little indigenous communications infrastructure. In spending terms, the US accounts for nearly 50% of the total worldwide investment in military SATCOM equipment.

As technology advances, so does the amount data that is created. UAVs alone create huge quantities of data when they go up in the air and begin sending back crucial operational data. But this comes at a price. Increasing data means demand for bandwidth on military satellites is far outstripping what is currently available.

Bandwidth is fast becoming a prized commodity and for today’s soldiers access to SATCOM is not always guaranteed.

Militaries and governments, particular in the West, are looking at ways to ease this demand on military satellites. With budgets squeezed, they are turning to the private sector to supplement capacity by using commercial satellites to deliver non-critical communications. This frees up capacity and ensures access on military satellites for critical operations.

In 2010, it was estimated that the US Department of Defense (DoD) spent $640m of a $1.6bn SATCOM budget on commercial satellite services – nearly 40% of the total budget. The Defense Information Systems Agency, a parent agency of the DoD responsible for government communications, predicts the cost of commercial satellites could grow to $5bn in the next 15 years.

“The problem with [commercial] satellites, of course, is there not as secure as the military ones. So it’s a trade off,” Rousseau adds.

“We know for a fact that a lot of the imagery that comes off UAVs, for example, goes through commercial satellites. How do you qualify that as critical and non-critical?”

The commercial satellite sector has been rapidly expanding in recent years thanks to a growing market for satellite television and high-definition broadcasting across the world. To meet this demand, commercial companies can now develop, build and launch a satellite in around three to four years. For the military, this process is in the region of five to 15 years.

“Bandwidth is fast becoming a prized commodity and for today’s soldiers access to SATCOM is not always guaranteed.”

Satellite companies make money by selling capacity to broadcasters and others telecommunication firms, usually on long-term contracts lasting five to ten years. The US military, in contrast, only leases capacity for a year and can even lease bandwidth for a few months with so-called ‘spot-market’ purchases, which are more expensive.

A report this year by the US Defense Business Board looking at this issue warned that this could lead to increased costs in the future. “DoD will likely experience future increased competition [for bandwidth] and hence, increased cost, for commercial satellite contracts,” the report said.

Another side-effect to this is the commercial sector’s unwillingness – because of the increased costs for user and manufacturer – to invest in effective security measures for its SATCOM systems. Most civilian enterprises and broadcasters do not need advanced security for their SATCOM needs and are not willing to pay the additional lease costs to cover its installation.

The threat of jamming to commercial satellite communications

Recent events have shown that commercial satellites can be compromised. In September 2013, Qatar’s news channel Al-Jazeera accused Egypt of jamming the ArabSat satellite causing interference with its programming.

Jamming, which can be both intentional and unintentional, can significantly compromise communications, which in a battlefield scenario could cost lives. A satellite’s ‘down link’ – the communications being transmitted from the satellite to the ground – could also be at risk from interception meaning sensitive data could end up in the wrong hands.

“There are a variety of different ways to mitigate this type of interference or jamming,” says John Airey, systems engineer at BAE Systems Future Combat Air Systems. “For example, nulling beams and frequency switching, changing frequency, reducing data rate, allocation of all power and bandwidth to critical communications, as well as frequency hopping and spread spectrum techniques can be used to overcome such issues.

“In addition, if the communications from an unmanned air vehicle or another valuable asset are not through a single satellite or communication route, multiple redundant communications channels will be available so, in the case of a loss of a particular channel, the asset is not completely without communication links,” Airey adds.

“To meet this demand, commercial companies can now develop, build and launch a satellite in around three to four years.”

Engineers from BAE Systems and EADS Astrium have recently helped develop a secure ‘communications corridor’ on commercial satellites using the Ka band frequency range. The use of the Ka band, a largely uncongested frequency, creates capacity and also the ability to transfer large amounts of data at high speeds.

“This will allow a government or military user to use the benefits of the availability of commercial capacity for non-critical operations, and migrate onto more assured military grade capacity for critical operation in time of stress such as jamming,” explains David Blain, airborne product manager at EADS Astrium.

Anything which requires a satellite communication link can benefit from utilising the Ka band. Aircraft – in particular UAVs – can benefit from this technology, as well as land installations, land vehicles and surface vessels.

Commercial satellite operators understand the increasing importance of security for both government and military, which is shown in new satellite systems being developed. Many companies see security and increasing needs for bandwidth as a key selling point and market opportunity for their new systems.

Inmarsat, a leading telecommunications satellite company, is about to launch its first Inmarsat-5 satellite this year. The satellite will be part of a new $1.2 bn global network called Global Xpress. The network will eventually be made up of three satellites providing global coverage and bandwidth performance of up to 50mbps for both commercial and military customers.

The Global Xpress system is a response from a commercial provider to the concerns voiced about both capacity and security. But can a commercial operator really ensure secure communications?

“When we designed Global Xpress we actually knew and understood that it was necessary to design it to serve the government market and therefore build in security architectures that were necessary to meet the needs of the government customer,” says Andy Start, president of Global Government at Inmarsat.

“It is specifically optimised to meet the need of a military customer and as a result it should be suitable for the highest levels of data classification,” added Start.

It’s not the capacity, but the efficiency

Increasing capacity might not always be an option, so commercial companies are also looking at ways to increase bandwidth efficiency for SATCOM users. Can systems allocate bandwidth to users that need it most?

“The use of the Ka band, a largely uncongested frequency, creates capacity and also the ability to transfer large amounts of data.”

This is a focus for Hughes Network Systems, a US-based provider of satellite broadband systems. Their HX System – a broadband satellite system – can identify where the greatest need for bandwidth lies and recalibrate systems in seconds, rather than the weeks it currently takes for many existing systems.

“You don’t even have to wait for high throughput satellites if you have the right management systems you can utilise capacity very well,” explains Rajeev Gopal, a senior director at Hughes Network Systems. “The challenge is how to introduce these technologies…unless you demonstrate these technologies it’s very difficult to convince people.”

This convincing may become easier as capacity, security and cost issues continue to trouble defence planners. SATCOM is, after all, a key capability in a military’s inventory. With SATCOM costs continuing to grow and budgets shrinking, efficiency may be a valid solution for cash-strapped militaries.

While progress in networked capabilities forges ahead, military equipment and personnel will depend more and more on SATCOM, the issues of bandwidth scarcity will take on increasing significance. The question remains whether the commercial sector can really provide all the answers for the military.

From the latest-generation flight simulators to the world of gaming consoles, simulations are used in every walk of life.

From their inception, helicopters were designed to lift heavy loads externally and drop them off in hard to reach areas.