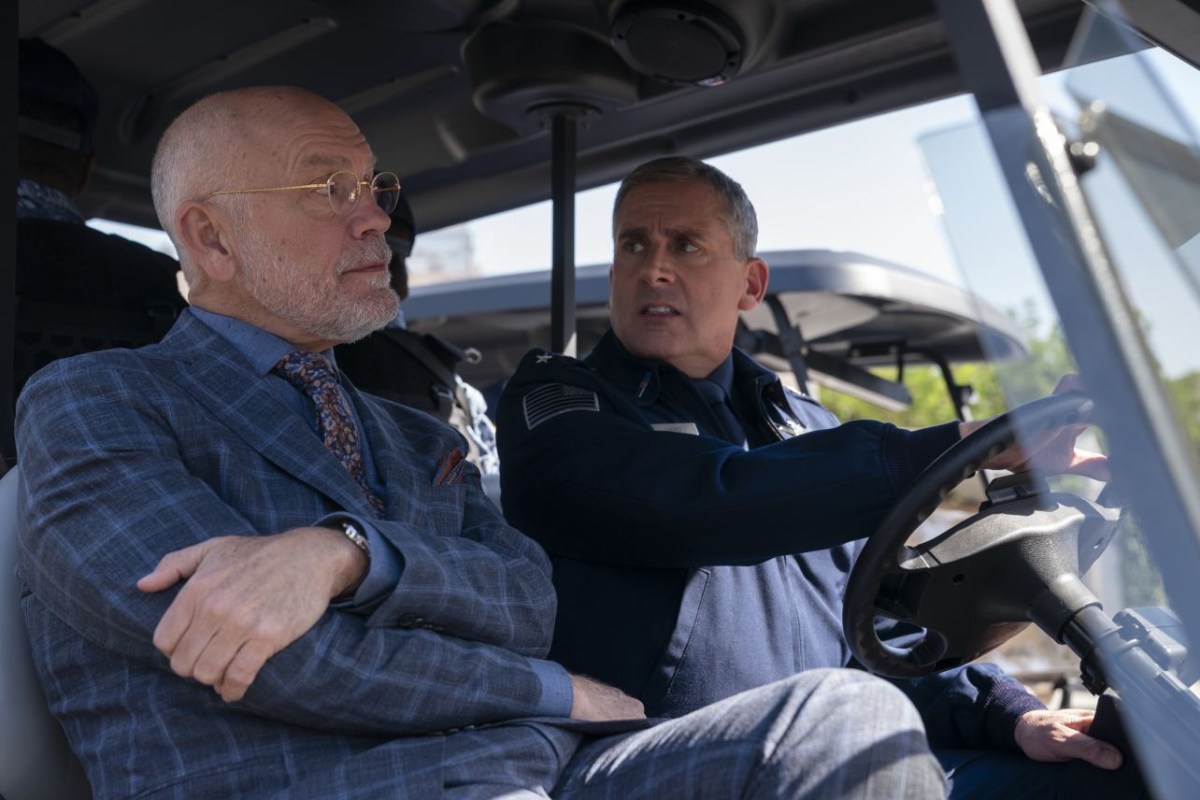 SPACE FORCE: STREAM IT OR SKIP IT?

Opening Shot: Air Force General Mark R. Naird (Steve Carell) gets a fourth star pinned on his lapel by his wife Maggie (Lisa Kudrow). Secretary of Defense John Blandsmith (Dan Bakkedahl) tells him that it’s the highest rank, and he answers only to POTUS and SecDef. A sparse crowd, including Maggie and his daughter Erin (Diana Silvers) applauds.

The Gist: Mark is completely honored to get the promotion and take his seat on the Joint Chiefs of Staff. But when he runs into current Air Force chief Kick Grabaston (Noah Emmerich) on the way to the situation room, he finds out that his old rival isn’t retiring. When he gets into the room, Naird finds out that he’s in charge of the newest military branch, created by our current president: the Space Force.

His task is to get it up and running, defending our satellites that transmit sensitive government information. He’s also tasked with returning Americans to the moon and beyond. “Boots On The Moon” is the slogan he’s been given to tout.

Mark is obviously disappointed, but he starts thinking about how he can build the branch from the ground up. As he tells Maggie how excited he is about the job, he also tells her that they’re moving to Colorado, where they’re converting an old NORAD facility into a base and launch facility. The news sends Maggie reeling.

Cut to a year later. The Space Force is ready to test launch a $6 billion satellite, but his leading civilian advisor, Dr. Adrian Mallory (John Malkovich), advises against the scheduled launch, due to the humidity being off. Mark wants to keep to the launch date because he has a congressional delegation coming, but everyone on the base, from his assistant, Gen. Brad Gregory (Don Lake) to Russian/ISS liaison Yuri “Bobby” Telatovich (Alex Sparrow) has heard that the launch was scrubbed. It seems like Dr. Malloy fashions himself as the one in charge instead of Mark.

Mark needs a win right now; his father Fred (Fred Willard, RIP) is losing his marbles in New Jersey, and Mark has to use one of their satellites to locate his wandering mother. Maggie is in prison “for a long time,” in her words. Erin hates her new school and Mark finds out that the “Bobby” she’s dating is really the much-older Yuri. His social media manager, F. Tony Scarapiducci (Ben Schwartz), sends out meaningless tweets where he reacts to fast food Twitter accounts. And the “missile-killing missile ” that they were developing just blew up on the launch pad. He challenges the chief engineer, Dr. Chan Kaifang (Jimmy O. Yang), who contends that the conditions should be perfect, but Mark would rather go with his gut.

So, with the delegation watching, the satellite launches the next day. But as he’s celebrating with Dr. Malloy on his porch, he sees something through his telescope that he just can’t believe.

Our Take: When the series Space Force was first announced, the idea behind it seemed to be a slam dunk. Steve Carell and Greg Daniels — the star of the US version of The Office and the veteran writer who created that series — were collaborating on a show about the nebulous Space Force that our current president created out of literally thin air. Carell would lead an all-star cast. How could things go wrong?

Well, go wrong they did, and it’s evident from the first laugh-free episode. There is such a deep well of absurdities to satirize on this series, we were mystified why Carell and Daniels decided to go the route that they did during the first season of The Office. Remember that season? Carell’s Michael Scott was an obnoxious buffoon instead of the well-meaning manchild that he developed into. We’re back to that here. Mark Naird isn’t as stupid as first-season Michael Scott, but he’s sure as hell lacks a level of self-awareness that would signal that what he’s been tasked to do is patently ridiculous, given the fact that the Space Force feels like a superfluous program whose functions are covered by other federal agencies.

That should have been the rub of the show, and may still be… eventually. We get hints of that at the Joint Chiefs meeting when the other Chiefs — played by Emmerich, Patrick Warburton, Diedeich Bader, Jane Lynch and Larry Joe Campbell — all question the need for a Space Force, given that they all have it covered (well, except for the Coast Guard, who ends up moving from fifth most-important branch to the sixth).

But what we got in the first episode is that the overenthusiastic Gen. Naird needs something to go right while everything around him is a shitshow. He’s undermined by everyone from his civilian advisor to his daughter. That could be pretty much the premise of any sitcom where someone is in charge of something. It’s OK if Naird is hapless, but without some more commentary on the pointlessness of the Space Force, and maybe some glancing blows at the current administration, the comedy is toothless.

Carell and Daniels could right the ship. Daniels’ other current show, Upload, seems to do a fine job commenting on our computer-dependent society and how different people see death. None of that layered approach can be found on Space Force, at least not yet.

Sex and Skin: Nothing.

Parting Shot:Mark looks through his telescope and sees a larger ship — maybe the ISS? — come by, stick out its robot arm and take the solar panels off the new satellite, disabling it.

Sleeper Star: Diana Silvers as Erin is one to watch. Her character is the only one who will keep Mark grounded (no pun intended), especially if she continues to challenge him with Maggie in prison.

Most Pilot-y Line: When Chan talks to Mark about why the satellite will fall to earth under imperfect conditions, he goes, “Where are you from, Chan?” “Ohio,” he replies. “Originally?” Mark shoots back. While Mallory calls him on the casual racism, it seems like an easy joke that shows us how un-self-aware Mark is.

Our Call: SKIP IT. It pains us to say this about Space Force given Carell’s and Daniels’ involvement and the amazing cast. But we were looking for a sharp satire, not just a workplace comedy that’s feels more silly than sharp.