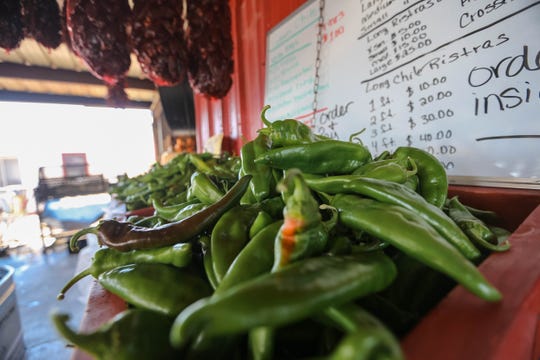 In the coming months, NASA scientists plan to fly the NuMex Española Improved chile to the International Space Station, where it will be part of an ongoing experiment to grow crops without gravity — and perhaps eventually on Mars.

Española native Jacob Torres, a contracted technical and horticultural scientist at NASA, has spent the last two years working on the mission, known as PH04, and similar plant growth projects.

The mission is part of NASA’s long-term goal to land on Mars by 2034 and eventually colonize the red planet. For Torres, being part of such a revolutionary mission is a small step for man, but a giant leap for his community back home.

“If I can get to this point that I’m at now, anybody can do it,” Torres told the Santa Fe New Mexican.

“We are told ‘Española is the worst,’ so we believe it,” he said. “There needs to be somebody on the opposite spectrum, saying ‘No, we aren’t.’ “

Growing up, Torres said, he lacked motivation and “wasn’t a good student at all.” In junior high, after a run-in with local gang members, he was kicked out of Española Public Schools and enrolled at McCurdy Charter School for his freshman year of high school.

After “barely graduating” in 1997, Torres decided to postpone college and move to Las Vegas, Nevada, where he bussed tables at Hard Rock Cafe and later became the restaurant’s manager at age 20. Because much of his family worked in restaurants — his grandfather, Juan Valencia, owned Española’s iconic Johnny’s Bar — it seemed likely he was headed down that same path.

He went on to manage actor Bill Murray’s chain restaurant, Murray Bros. Caddyshack, in South Carolina and Florida for five years. But when a hurricane destroyed one of Murray’s newer restaurants just five months after opening, Torres said “that was the catalyst that was like, ‘OK, time to move on, man.'” 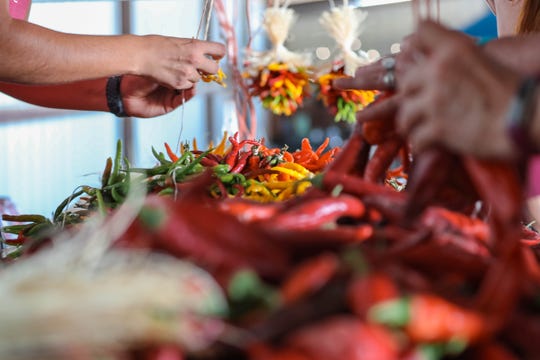 In the coming months, NASA scientists plan to fly the NuMex Española Improved chile to the International Space Station, where it will be part of an ongoing experiment to grow crops without gravity — and perhaps eventually on Mars. (Photo: Nathan J Fish/Sun-News)

At 27, Torres decided to go back to school — first for an associate degree at Northern New Mexico College to study renewable energy and automotive technology, and then on a full-ride scholarship to New Mexico State University for a bachelor’s in mechanical engineering.

After working at a diesel manufacturer in Indiana, he applied to graduate school at Purdue University, where he earned a master’s in mechanical engineering technology.

During his second year of grad school, Torres decided to apply for an internship at NASA, although the possibility of being accepted felt like a long shot.

“Everyone said I had no chance. … I had a professor who literally said, ‘I don’t know why you’re wasting your time,’ ” Torres said. “It broke my heart, but it made me work harder.”

Much to his surprise, Torres caught NASA’s eye, largely because his grad school thesis was focused entirely on a technology called BioWall — an automated light and irrigation system that uses plants to filter air..

Others are reading: COVID-19 pandemic affecting this year’s green chile crop in New Mexico. Here’s how.

“NASA was basically doing the same thing, but for growing crops for astronauts,” Torres said. “So, when my application came in, they said, ‘Oh, this is awesome, an engineer who grows crops.’ “

After finishing the 10-week internship, Torres was invited to stay an additional four weeks. At the end of 2018, he was hired as a full-time contracted scientist at the Kennedy Space Center in Florida — several months before he finished his thesis and graduated from Purdue.

“Looking back now, it seems like there was a plan for me the whole time. I just didn’t know what it was,” Torres said. “It’s almost like I’m living a script.”

Torres, 40, is part of a team of about 20 NASA scientists dedicated to growing plants sans gravity — a critical step toward eventually colonizing Mars.

“We anticipate sending humans to the fourth planet as early as the 2030s,” NASA Administrator Jim Bridenstine said in a statement. “What seems like science fiction — getting a crew to Mars, landing them on the surface to explore and conduct experiments, and bringing them safely home — is on the horizon.”

Before NASA’s first astronaut lands on the red planet, crews must do research to ensure astronaut diets are supplemented during a two-year round trip. Traveling to Mars is expected to take a minimum of six months, depending on planet alignment, and astronauts would spend about a year on Mars before returning home, Torres said.

Growing plants in space is not a new concept. Scientists started experimenting with partial grow-outs in the 1960s and ’70s. “What’s new is the hardware — what we’re growing them in,” Torres said.

Before, astronauts had about three days to germinate seeds, he said, “but now we have the capability to do full grow-outs,” which allows astronauts to consume fully matured, more nutrient-rich produce.

Torres said prepackaged meals would not last long enough to feed astronauts for two years because nutrients degrade over time. Plus, there are only so many packaged foods available, which causes meal fatigue.

“Can you imagine eating the same thing over and over again? We wanted to give them something fresh,” he said.

Another perk of growing plants in space is the psychological benefit, said Matthew Romeyn, a space crop production project scientist at NASA. Being on a spacecraft far from home for long periods of time can take a toll on astronauts’ mental health, and projects like these can be a positive outlet for meaningful work, he said.

On these missions, “a plant can be a really good way for them to have something to do,” Romeyn said.

David Hanson, a biology professor at the University of New Mexico and an expert on plant physiology, worked on the initial PH01 mission at NASA. He said astronauts, including Serena Auñon-Chancellor, would “light up and get all happy” while working with the PH01 sprouts.

“We connect to Earth through plants a lot more than we realize,” Hanson said, adding these interactions can alleviate homesickness. “It’s clear … the psychological value of growing plants up there. People argue whether (the act of growing a plant) is more important than the actual nutritional value.”

Still, without pollinators like bees, there are biological limitations on what plants can grow and which variations will perform best.

Until now, NASA had focused on growing things like lettuce, leafy greens and mizuno mustard, but it is working to diversify that list. “If you’re an astronaut on Mars, you can’t live on lettuce alone,” Torres said.

Although peppers are not self-pollinating, a grower can tap the flower or shake it to assist with fertilization. Given that peppers also provide high levels of Vitamin C — higher than many citrus fruits — they seemed like a great option to grow in outer space, said Romeyn, who has worked on the project for five years.

The question is: “Which one do you grow? What pepper do you pick? That’s where we scratch our heads,” Torres said.

Amid its pepper research, NASA came across New Mexico’s Hatch chiles. In meetings about the crop, Torres, still an intern at the time, suggested they try other New Mexico strands from up north, since chiles at higher elevation have evolved to grow faster than the typical 140-day growth period of a Hatch chile. The goal then became to find a “Hatch-like pepper that matures faster,” he said.

In August 2019, after running a number of tests on Hatch, Española, Chimayó and other strands from New Mexico State University’s Chile Pepper Institute, “we officially said Española Improved is our one,” Torres said. Of more than 40 pepper variations the team tested, this Hatch-Española hybrid is the one that will grow in a next phase of research.

“It’s the ambassador chile that represents all of the peppers,” Torres said. “It’s not that this is the best pepper in the world. It means that it’s the best pepper we can grow in this environment in space that we know of.”

Romeyn said the chile has been fantastic, because even before it’s fully mature, it can be consumed when the red peppers are still green.

For Torres, the whole process is hard to believe — but not just for personal reasons. He hopes the success of this experiment will make all of New Mexico proud, especially people from Española.

Well aware of the negative stereotypes of Rio Arriba County, including alcoholism and opioid abuse, Torres said it’s critical to set a positive example for youth in the area. He hopes his story teaches others that they can overcome hardship and choose a better path.

“I have to change the future for these kids who are coming up next, and that means making some noise,” he said. “It’s showing them, ‘Look, I’m from Española, and look what I’m doing. If I can do it, you can do it, too.'”

Olivia Harlow writes for the Santa Fe New Mexican. This story was provided through a partnership with the Associated Press.