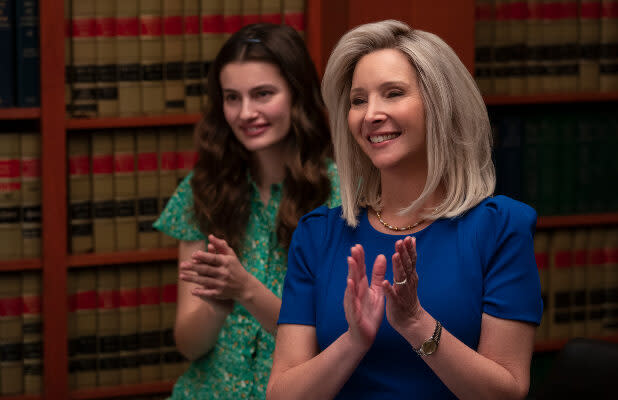 (This article does contain some spoilers for “Space Force” on Netflix)

What’s the inverse of a gag? Like, what if a gag is a gag by not making a joke? What if the joke is that there isn’t a joke? This, we think, is something that we think Netflix’s “Space Force” did throughout its first season.

What we’re talking about here, of course, is the situation with Maggie Naird (Lisa Kudrow), who spends almost the entirety of season 1 in prison. But the weird thing about that is that “Space Force” never establishes what she did to end up there. We just get only the vaguest references. At one point, General Mark Naird (Steve Carell) says that Maggie committed a “very serious crime.” On several occasions the characters mention that she’ll be locked up for at least 40 years, and one time it’s specified that her sentence is 40-60 years.

But nobody ever says what Maggie actually did. It’s not presented as a mystery, since it’s not necessarily important to the plot to know what her crime was. It’s just this strange information gap that never gets filled.

So we asked “Space Force” co-creator Greg Daniels about it.

“At the moment, we’re kind of enjoying the mystery around it and the question marks that it raises. It causes you to lean in because we’re dropping little hints about what it is and how serious it was. So we’re enjoying not being specific at the moment. You didn’t miss anything. It’s not in there,” Daniels told The Wrap.

“It was pretty serious, clearly.”

So let’s examine the clues, which are very scarce. Obviously, we’ve got the stuff mentioned about — the 40-60 year sentence, Naird saying the crime was “very serious.” Beyond that, there’s just about nothing to go on.

The first episode contains a time jump of about a year, and the crime, or at least the trial, occurred during that gap. You’ll recall that Maggie was not in prison at the beginning of the premiere episode. But from there her imprisonment is basically just a fact of life, and there isn’t even any kind of discussion about the crime.

But we have a few clues nonetheless. The first is that lengthy prison sentence, which is way too long to be something mundane. The second is that whatever she did wasn’t so serious that Naird was fired or forced to resign from his post at Space Force — though considering that “Space Force” is a comedy there’s probably more leeway here than there would be in real life.

Generally speaking, a sentence like that comes with a conviction for murder, sex crimes, or high-volume drug trafficking. But “Space Force,” which is at its heart a light comedy, is not the type of show that would go in either of those directions. But if we look at U.S. sentencing guidelines we can see other possibilities. Possibilities that could make for funny jokes.

While a prison sentence of 40-60 years is pretty much as high as the American criminal justice system goes before a life sentence, there are crimes that can earn that sort of sentence that could work as a gag. Per U.S. sentencing guidelines, there are two items that we think could fit that bill: piracy and kidnapping.

While we typically think of piracy as a water thing, right now we’re looking more at air piracy. For example, perhaps Maggie, distraught about having to move from D.C. to Colorado as her husband takes over the new Space Force, had a breakdown on the flight out and tried to hijack the plane to force it to return to D.C. Really, Maggie would be around aircraft of all kinds so often that there are any number of situations we could imagine for a piracy charge.

But realistically, whatever the crime is, it’s likely the end up being the result of some kind of misunderstanding rather than something that would make us dislike Maggie. And honestly, the way Carell said “very serious crime” came off like he was trying to hide that it was actually something stupid and embarrassing instead of legitimately serious.

And hey, maybe that line of thought is why we don’t find out what Maggie did this season. Maybe they had planned to tell us, but the crime didn’t quite fit the tone of the show so they cut it.

Or maybe it’s just that the lack of an explanation is itself the gag and we’ll never actually find out what she did at any point before “Space Force” wraps up for good. Which would be pretty funny.