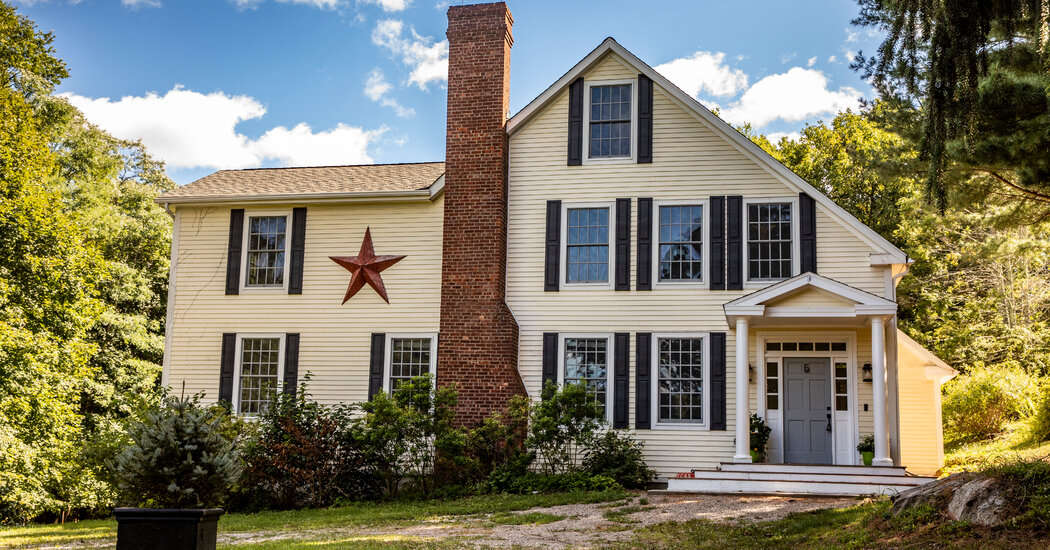 Unsurprisingly, the pandemic-era real estate market in this Dutchess County town has been ‘crazy,’ with some homes selling for over asking price.

In March, as Covid-19 swept across New York, Jordan and Alina Ellington decided to leave the city for a while. After spending a couple of months in a Catskills Airbnb, they resolved to make the move permanent.

Mr. Ellington, 50, is the owner of SecureReview, a cybersecurity company; Ms. Ellington, 34, is a psychoanalyst completing her New York State licensing requirements. After years of apartment living in Manhattan, most recently in a rental on the 59th floor of a luxury high-rise, they began their search for a house. 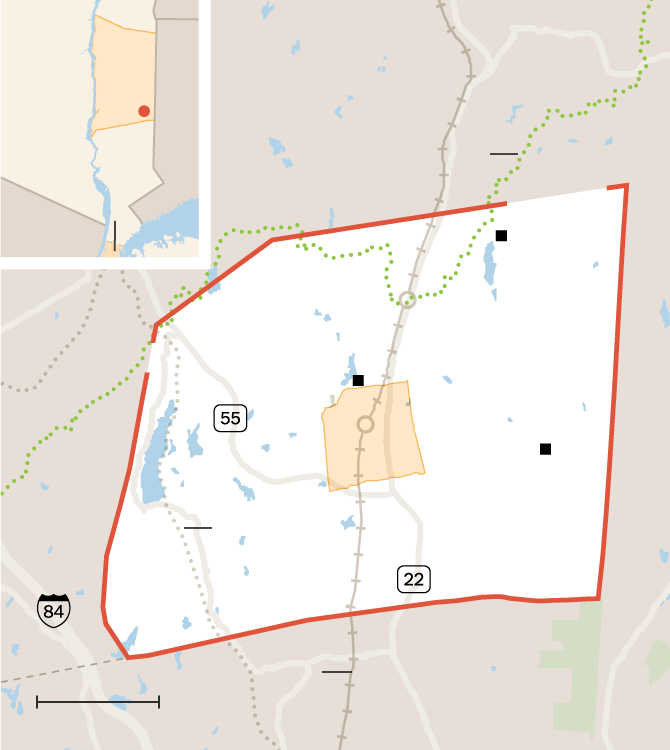 Their criteria: “We wanted a country lifestyle, some land and some privacy, within an hour and a half of the city,” Mr. Ellington said.

They made offers on two homes in northwestern New Jersey, but were outbid on the first (“We were heartbroken,” Mr. Ellington said) and withdrew their offer on the second (“We realized we just didn’t love the house,” he said). Then they discovered Pawling, in the southeast corner of Dutchess County, with its quaint village, forested vistas and Metro-North station. “Pawling fit our profile better than anyplace else,” Mr. Ellington said.

On July 31, the couple closed on a 4,452-square-foot, three-bedroom colonial farmhouse, built in 1930 on 5.6 acres. They paid $525,000 for the property, which includes a heated pool and an apple orchard. They moved in the next day and, a few weeks later, adopted a Dutch shepherd named Velvet. “I’ve been waiting for the opportunity to have a large dog for some time,” Mr. Ellington said.

The roughly 45-square-mile town of Pawling is bordered on the north by Dover, on the west by Beekman and a sliver of East Fishkill, on the south by Putnam County and on the east by Sherman, Conn. In its center sits the less-than-two-square-mile village of Pawling, a hub of shops, restaurants and small businesses. The town and village operate as separate municipalities but share some services. James Schmitt, the town supervisor, placed Pawling’s population at around 8,200, of which 6,500 live in the town and 1,700 in the village.

Either way, the Ellingtons’ property taxes may be higher than those for equivalent homes in surrounding towns. “Pawling likes keeping its commercial footprint small,” Mr. Schmitt said. “It’s no secret — that’s why taxes are high.”

Weekenders make up a significant portion of Pawling’s population — Gillian Stewart, a broker and owner of Gillian Stewart Real Estate, estimated about 30 percent — and they contribute to the town’s broad socioeconomic demographic.

“You have your commuters and your blue-collar residents,” Mr. Schmitt said. “And then you have your weekend-home people who fly in, in their helicopters.”

Pawling, located about 70 miles north of Manhattan, is bisected north-south by Route 22. To the east is the Quaker Hill area, its leafy streets lined with horse farms and expansive estates. To the west are the hamlets of Holmes and Whaley Lake, whose centerpiece is a 252-acre lake. While the village bustles, the rest of the town feels quiet, with more than 400 acres of parkland and 1,100 acres of protected land, including part of the 20-mile-long Great Swamp.

Pawling has all kinds of housing styles, from ranches and colonials to a cluster of Victorian homes in the village. Data from the Pawling assessor’s office indicates that the town has approximately 2,250 single-family houses and 45 multifamily houses. There are 150 condominiums in the Cedar Valley complex and 119 townhomes in Deerfield Ponds at Squire Green. The village has an additional 500 or so single-family homes, 70 multifamily homes and three four-story apartment buildings.

Margaret Generoso, an agent with Berkshire Hathaway HomeServices, said properties in Pawling run from the $200,000s for a condo or a smaller house that might need work into the millions for a multi-acre estate. “You can get a beautiful house for between $300,000 and $400,000,” she said.

When Christina Shaw bought in that price range, she knew Pawling skewed pricier than its neighbors, but she wanted to live there. Last November, Ms. Shaw, 45, sold her home in Beekman for $300,000 and moved with her teenage son to Pawling, the location of her marketing and design company. She paid $361,000 for a 1,296-square-foot, three-bedroom ranch on 1.15 acres. “It was worth it to me to spend more money for a smaller house on a smaller lot,” she said.

As for the pandemic-era market, “it’s been crazy,” Ms. Stewart said. “Inventory is low, and demand is high. Some listings have multiple offers; some are going for over asking. That’s a new phenomenon for Pawling.”

Ms. Shaw called Pawling “the quintessential small town, with lots of community activities” — among them, a townwide garage sale, an arts-and-crafts festival and a holiday Decemberfest, all sponsored by the Pawling Chamber of Commerce.

In Quaker Hill, the (temporarily closed) Akin Free Library, a Second Empire-style building, houses the Gunnison Museum of Natural History and the Historical Society Museum. At Lakeside Park, the town holds the Music by the Lake series every summer (it was canceled this year).

Music lovers can also enjoy the Pawling Concert Series, in its 46th season (but canceled through 2020), and rock shows (now live-streamed) at (the temporarily closed) Daryl’s House Restaurant and Live Music Club, owned by Daryl Hall, of Hall and Oates fame.

The Appalachian Trail passes through town, and there are miles of trails in the 1,043-acre Pawling Nature Reserve, as well as the town-owned Edward R. Murrow Park and Lakeside Park, which has pickleball courts, a dog park and a sandy beach on Green Mountain Lake. The Pawling stretch of the Maybrook Trail is expected to reopen later this year. And the first Pawling 24 Hour Trail Running Festival is scheduled to take place this month.

Part-timers and full-timers mingle in the village, Mr. Schmitt said: “Everyone ends up there ­— at the farmers’ market, at the restaurants — and everyone gets to know everyone.”

The town of Pawling is served by the Pawling Central School District, which also serves sections of Dover, Beekman and East Fishkill, in Dutchess County, and Patterson, in Putnam County. The district’s 1,074 students go to Pawling Elementary School for kindergarten through fourth grade, Pawling Middle School for fifth through eighth grade, and then Pawling High School. The middle and high schools share a campus.

In July, the district announced its reopening plans: a hybrid model with students in kindergarten through eighth grade attending daily and those in high school attending every other day. A fully remote option is also available.

Kim Fontana, the superintendent, confirmed that on the 2019 state assessments, 58 percent of the district’s fourth-graders were proficient in English language arts and 57 percent were proficient in math; statewide equivalents were 48 percent and 50 percent. Mean SAT scores for the district’s 2019 graduating class were 556 in evidence-based reading and writing, and 564 in math; statewide means were 531 and 533.

Pawling is also home to Trinity-Pawling School, an all-boys private boarding and day school for seventh through 12th grade, and the private, coeducational Mizzentop Day School, for prekindergarten through eighth grade.

Commuters to Manhattan can catch Metro-North Railroad’s Harlem Line in the village at the Pawling station, where rush-hour trains to and from Grand Central Terminal take a little over two hours. Some commuters travel five miles south to the Patterson station, where overnight parking is available. In northern Pawling, the Appalachian Trail station offers a stop for hikers.

All of these options require a transfer in the town of Southeast. Round-trip fares are $46 peak, $35 off-peak and $475 monthly.

Driving to or from the city, along Route 22 and Interstate 684, takes roughly 90 minutes.

For three months in 1778, the John Kane House served as headquarters for George Washington. The house is now a museum owned by the Historical Society of Quaker Hill and Pawling.Credit…Tony Cenicola/The New York Times

What is now Pawling was the site of the first antislavery movement during the early days of the American Revolution. It was a Quaker movement, beginning with a declaration made in 1767, identifying the presence of God in every human being. “You couldn’t make God a slave,” Robert P. Reilly, Pawling’s historian, said. “It was wonderfully logical.”

A large Quaker community had established itself in and around present-day Pawling after Nathan Birdsall, a surveyor and Quaker, settled there in 1728. After the Quakers’ declaration, they set about dismantling the slavery system, refusing to buy slaves and slave-made products.

Within a decade, slaves in the community were freed. “This was the first unified action against slavery in the colonies,” Mr. Reilly said.

The Oblong Friends Meeting House, where the community gathered, was built in 1764. The rustic wooden building still stands, owned by the Historical Society of Quaker Hill and Pawling.