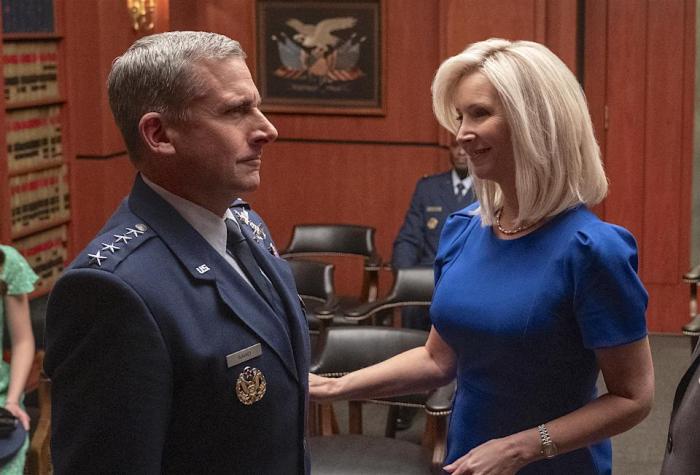 “Space Force is bad” feels like all that is really necessary to say about Netflix’s latest streaming series, but for the fact that there is so much talent involved. It stars Steve Carell, Lisa Kudrow, John Malkovich, Jimmy O. Yang, Tawny Newsome, and Ben Schwartz, and it comes from Greg Daniels, creator of one of the “best sitcoms of the 20th century,” The Office. Greg Daniels also created and wrote Upload, an Amazon series released last month that’s not great but still miles ahead of Space Force despite the lack of named talent in the latter series.

A few years ago, Donald Trump said that he would start a Space Force, and everyone laughed at Donald Trump and his cockamamie idea. Greg Daniels and Steve Carell quickly jumped on it and turned Donald Trump’s brain fart into a Netflix series. While in production, however, Trump one-upped Daniels and Carell and turned his brain fart into a reality, which kind of took the wind out of the sails of this idea. It’s the problem everyone encounters when they try and mock Donald Trump: He’s parody-proof because the reality will always be dumber and more absurd (see, e.g., the President violently clearing a peaceful protest so that he could pose with a $1500 Bible his daughter pulled out of her purse for a photoshoot in front of a church, where clergy had also been cleared). It did not leave a lot of room for Greg Daniels and Carell (who co-writes) to operate, and though the series makes passing reference to Trump (without naming him), there are no jokes in the series that can even come close to rivaling reality.

It’s hard to pinpoint exactly what went wrong with Space Force because everything about it goes so terribly wrong. Carell, in Get Smart mode, plays a General put in charge of Space Force for no apparent reason, and he’s been given the task of putting “boots on the moon” in a ridiculously short period of time. It’s something of a workplace comedy, only the workplace is full of astronauts, engineers, and command center operatives, and unlike The Office, there is nothing about their jobs with which the audience can relate. The series tries to mine team-building exercises and space simulations for episodes while building toward its inevitable launch.

Meanwhile, Carell’s character, General Mark R. Naird, is also dealing with problems at home, where his moody teenage daughter feels neglected because Naird spends all his time at work, while her mother, Maggie (Lisa Kudrow), is in prison. We do not know why she is in prison — it’s a bad running joke — only that it is a 40-60 year sentence, and that Maggie wants to have an open marriage so that both she and Mark can have their needs met.

It’s all a jumbled mess, and it takes down a lot of talent with it. Somehow, even Ben Schwartz misses the mark with his character, the social media guy for Space Force, who is more obnoxious than funny (the exact opposite of Jean Ralphio), while character actors like Dan Bakkedahl and Jessica St. Clair are largely wasted. Malkovich occasionally manages to rise above the material, but only Jimmy O. Yang — in a welcome departure from his Silicon Valley role — and Tawny Newsome manage to be consistently compelling presences in what may eventually turn into a romantic couple.

I say eventually, because Space Force ends with an unresolved cliffhanger designed to make us want a second season (which they are working on, though Netflix has not officially renewed it). Unfortunately, there is nothing in the premise of the show, or in the writing that would warrant a return.