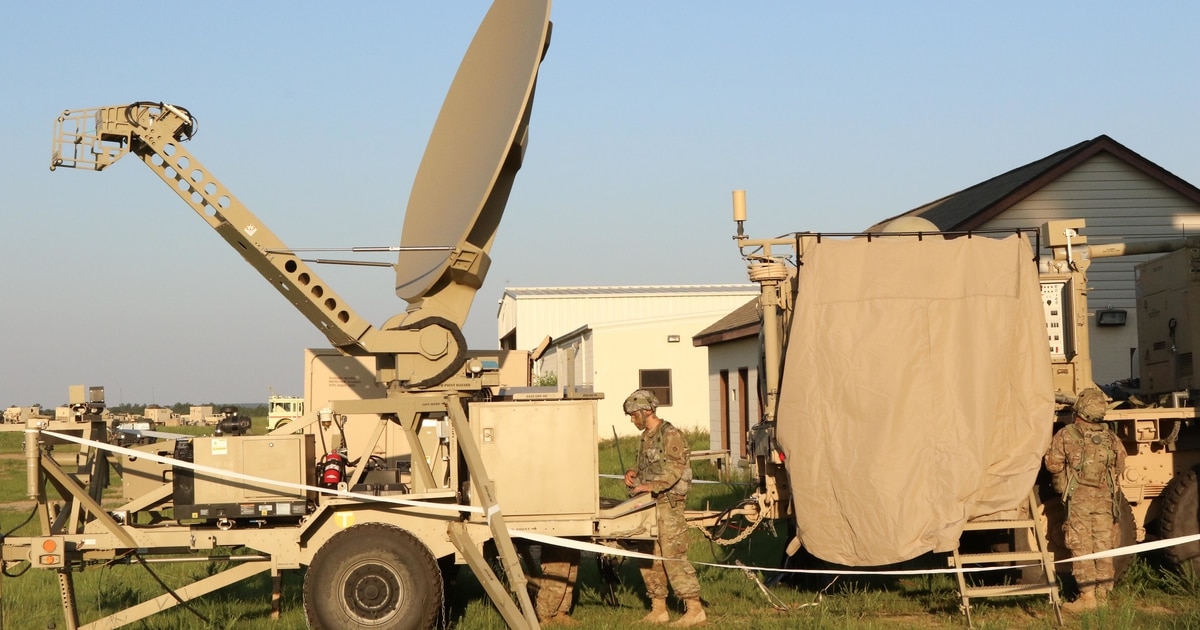 WASHINGTON — The U.S. Army’s tactical network modernization team is considering using satellite communications as a service capability for the next iteration of new network tools set for delivery in fiscal 2023.

The Army’s Network Cross-Functional Team as well as Program Executive Office Command, Control, Communications-Tactical held a technical exchange meeting Sept. 2 to discuss with industry focus areas and goals for Capability Set ’23, the next round of new network tools the Army plans to deliver to soldiers every two years.

Col. Shane Taylor, program manager for the tactical network at PEO C3T, outlined several priority areas for his program office, including a satellite-as-a-service need that he said provides a “wide gamut of opportunity.”

“The opportunity there is it could be anywhere from just leasing terminals to a cradle to [a] grave solution where we just say: ’All right, industry, if I need this capability in this location, what would that look like?’ And so the challenge really in the near term is it’s such a wide opportunity,” Taylor said. “There’s a lot of work that you’ll see us ask for some assistance going forward on that.”

While Capability Set ’21 centered on delivering technology to soldiers to address immediate network gaps, Capability Set ’23 is working to increase capacity, bandwidth and resiliency of the Army’s tactical network. Satellite communications is critical to that effort, Taylor said.

“I’ll keep hearkening back to resiliency, thickening, multi-path. SATCOM as a service also has a huge play in that role, and what I mean by that is it gives us just another opportunity to provide capability to the war fighter,” Taylor said.

The Army is interested in the networking capabilities that satellites can provide. Collins said in August that the service expects low- and medium-Earth orbit satellites to reach technical maturity in 2025 or 2027.

While the Army’s tactical network team is exploring LEO and MEO capabilities, Taylor assured industry that traditional geosynchronous systems will still have a role to play.

“I think they all have a role,” Taylor said. “But where we need industry’s help is getting after the ability to leverage each of those capabilities without having to leverage three different types of systems.”

Preliminary design review for Capability Set ’23 is scheduled for April next year, with critical design review one year after that. Taylor said his team is also focusing on scalable and multi-band antennas so soldiers don’t have to change out “feed horns” to change bands.

The team also wants to automate the primary, alternate, contingency and emergency, or PACE, decision-making process based on network quality, metrics and availability, Taylor said.

Project Manager Tactical Network is focusing on next-generation line-of-sight and beyond-line-of-sight communications capabilities as part of a pushing by PEO C3T is to improve low-probability intercept/low-probability detect for Capability Set ’23.

Additionally, Taylor said his team will “always” be looking for industry’s help reducing cost, size, weight and power for the baseband.

Taylor’s program is also looking for solutions to system provisioning for the next iteration of network tools. “The initialization of the routers and switch[ing] the firewall [configurations] and then how we automate that process and move that out across the network continues to be a challenge.”