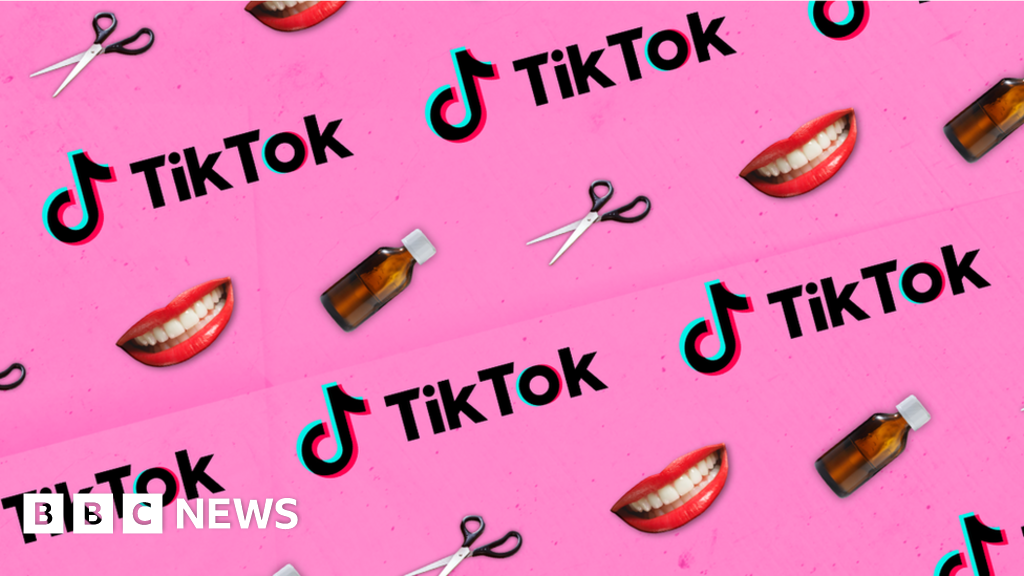 DIY beauty trends popular on TikTok could be dangerous and harmful, healthcare groups have warned.

When these videos went viral, they encouraged others to copy the so-called “beauty hacks”, which could cause permanent harm, the groups warned.

TikTok told BBC News the videos did not violate its community guidelines.

“It is important to remind people that social media should not be used as a primary source for dermatology issues,” Dr Anjali Mahto spokesperson for the British Association of Dermatologists said.

“When it comes to skin, it can lead to unnecessary fear or panic where it is not needed, wasting of resources such as money on products unable to treat medical problems, potential delay in treatment, as well as potentially worsening one’s psychological health.

A government spokesperson for the Department of Health and Social Care said it was “concerned by reports of dangerous and misleading cosmetic beauty ‘hacks’ circulating on social media.”

Some videos the BBC saw promote using chemical or physical ways to remove moles. Experts advise all moles be checked by a professional before removal.

“There is no ‘safe’ way to remove a mole at home,” Dr Ross Perry, NHS GP and medical director of Cosmedics skin clinics, said.

“This needs to be done by a qualified doctor or dermatologist who is trained and knows what they are doing.

“Using chemicals or attempting to ‘scrape’ off a mole could lead to infections, bleeding, scarring and deformity of the area.”

media captionExperts warn of the potential of blindness and other side effects to procedure.

“Eyelash glue contains cyanoacrylate which is known to be a contact allergen,” he said.

“Applying a potentially allergenic chemical to lips could result in a severe reaction.”

TikTok videos with the hashtag “teethwhitening” have amassed about 284 million views. Some recommend applying bleach to teeth, to avoid “expensive” over-the-counter treatments.

Under UK law, teeth-whitening products can be sold directly to the public only if they contain no more than 0.1% hydrogen peroxide.

And anything above this level should supplied, or used, under the supervision of a dentist.

media captionThere are warnings that some online teeth whitening kits are dangerous, as Nick Beake reports

The British Dental Association said administering the wrong products at home could cause “permanent damage.”

“The BDA is concerned about the DIY trend to whiten teeth with levels of hydrogen peroxide that are higher than that permitted in over-the-counter products,” a representative said.

“Using higher concentrations unsupervised, as some videos advocate, raises the risk of damage to teeth and gums, including burns to the mouth, tooth and gum sensitivity, as well as irritated or inflamed gums.”

One viral video copied throughout TikTok suggests a way of applying sun cream to create a contour affect.

“Using sunscreen on certain areas and missing others to create a pattern may be trendy – but the UV damage to the tanned area will invariably increase the risk of skin cancers in that site.

“Not only that, repeated exposure to UV light in these areas will make them age prematurely, so, in time, the skin will appear mottled and uneven.”

“It is dangerous to put citrus fruits on to the skin and then go into the sun,” she said.

“It can cause inflammation of the skin expressed in burning, redness and blisters.”

“Keeping people on TikTok safe is a top priority,” a representative added.

“Our community guidelines make clear that we will remove content promoting dangerous behaviour or activities that might lead to serious injury or physical harm.

“We are continuously evaluating our policies and processes to ensure we are doing everything we can to keep our users safe.”