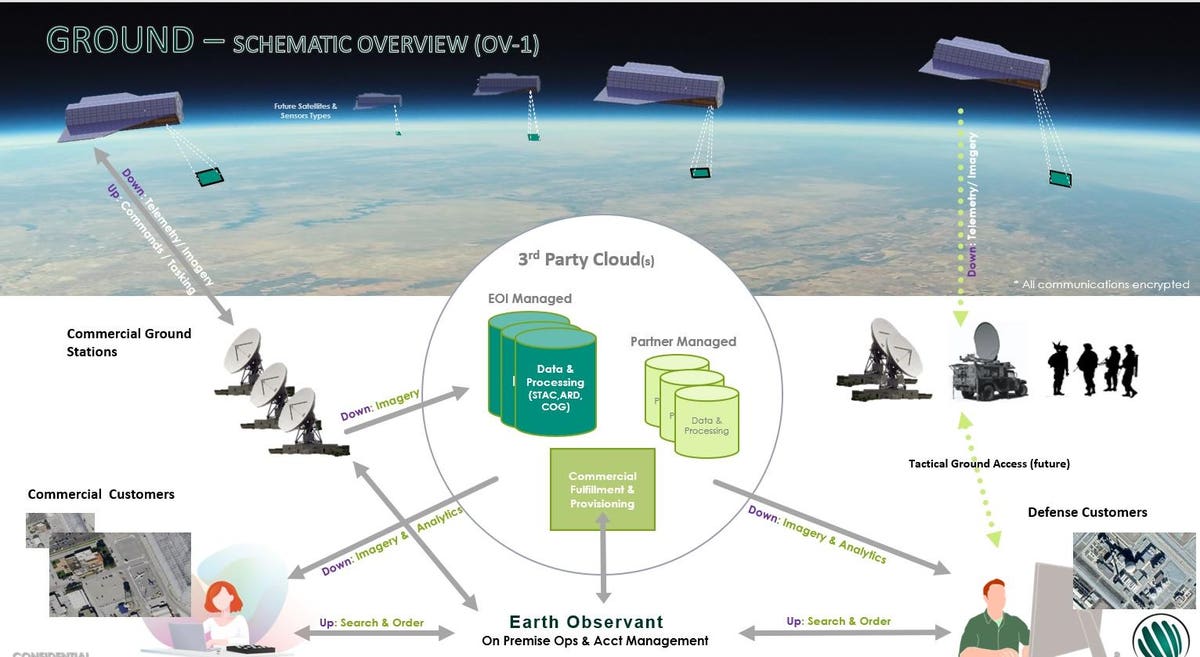 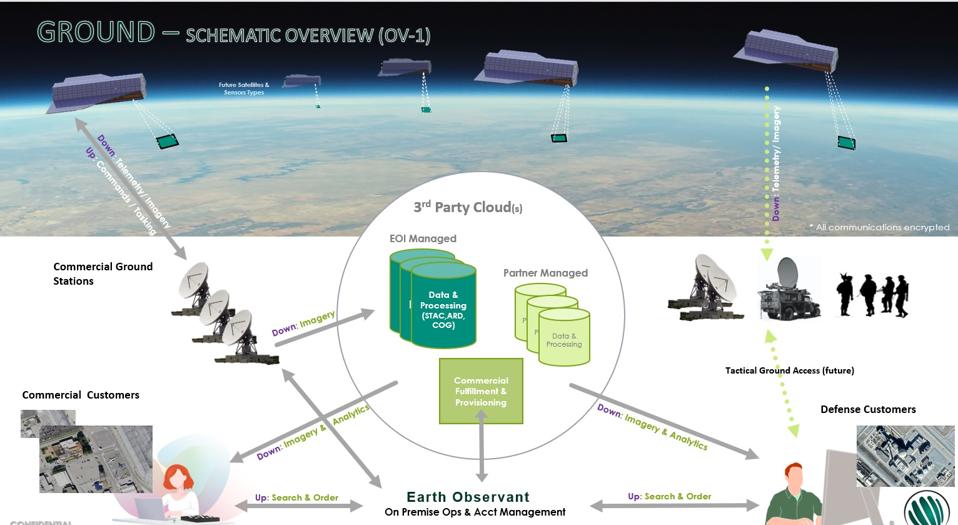 Satellites which fly in low Earth orbit (LEO) typically ascend to an altitude of 500 kilometers (310 miles) or higher above earth. VLEO sats like Earth Observant’s proposed “Stingray” imaging satellite fly at 300 km or less. At 250 km where the startup says Stingray will fly, satellites are still basically in Earth’s atmosphere. That comes with some downsides like aerodynamic drag and strong gravitational pull, which are significant enough to make a spacecraft’s orbit decay in less than 5 years, requiring changes in traditional designs.

But there are also real advantages. Flying at lower altitude can improve the resolution of optical sensors, radiometric performance (infrared/microwave sensors) and geospatial accuracy. Those sensing benefits can also reduce required payload size (optical, radar or communications) and thus cost.

VLEO Earth-observing satellites could be more competitive, either by flying more capable platforms at the same cost, or by offering the same capabilities at a reduced cost. One could argue that lower costs, allowing for greater numbers, also yield better coverage.

And there’s another issue. Low-Earth orbit is increasingly crowded.

Estimates suggest that by 2025, the number of man-made objects sent into space annually will surpass 1,100. Most will be stationed in LEO. SpaceX offers a prime example: It has launched over 600 LEO satellites for its Starlink broadband internet constellation and plans to launch thousands.

The Starlink team is building 120 smallsats each month and the Federal Communications Commission has approved SpaceX’s scheme to build out the Starlink constellation to 12,000 satellites. The company has applied for rights to add 30,000 more.

Amazon AMZN and U.K.-based OneWeb are building their own internet constellations in LEO that are planned to have 3,236 and 1,000 satellites, respectively. The resulting clutter could not only have implications for collisions in LEO but for density that might interfere with the sensing capabilities of very important military and strategic satellites at higher altitudes.

Earth Observant’s Stingray is a 400-pound, 8-foot by 8-foot optical imaging satellite with a Space Shuttle-like body, or “bus,” as it’s called in the industry. The shape helps reduce aerodynamic drag at the altitude at which Stingray will fly. It may also aid maneuverability for other purposes though we didn’t discuss it with Earth Observant. 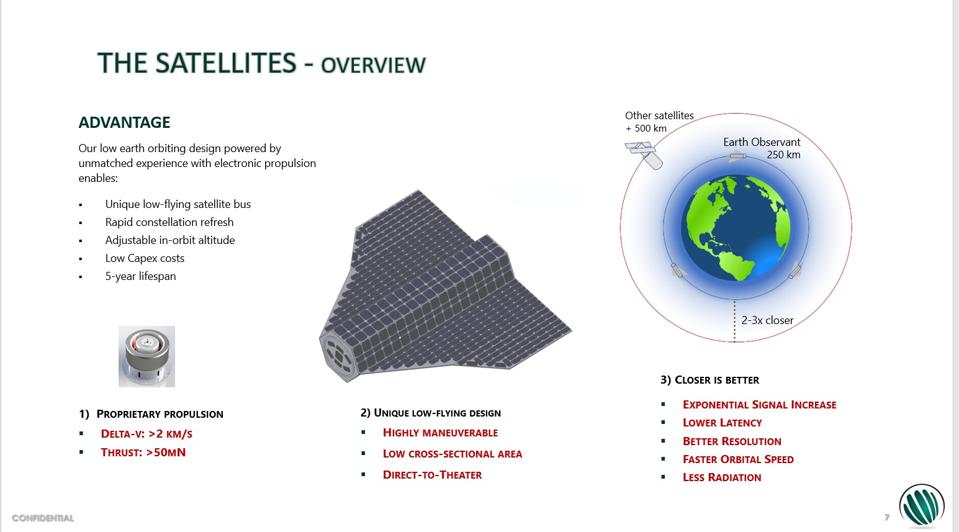 The privately held startup is comprised of veterans of the satellite industry with expertise in propulsion systems. They began designing Stingray in 2018 and hope to have a prototype aloft within the next 24 months, ultimately leading to a 30-unit constellation that can provide highly accurate, timely imagery to military, government and civilian customers.

“What I think intrigued the Air Force is the fact that we [proposed] operating in a very low-Earth orbit and that we could potentially produce [satellites] very quickly, rather inexpensively and get a number up in space,” says Earth Observant co-founder and COO Paul E. Smith.

Timeliness was another factor that appealed to AFWERX, the USAF’s Space and Missile Systems Center and the Air Force Research Laboratory, according to Smith. The VLEO Stingray could send near real-time imagery to Air Force or Army users. In satellite imaging terms, near real-time means transferring a partially processed image to a fixed ground station or mobile user within a few minutes.

That’s shorter than average partly due to the marginally lower latency that comes with low altitude transmissions, but also due to Earth Observant’s goal of carrying out some image processing (raw optical image data needs to be processed and formatted for use) onboard Stingray using edge computing methods rather than simply sending raw data to a ground station.

“Our goal is to have [the imagery data] skip the traditional ground station processing stacks,” Smith affirms. “We knew it was important, we didn’t know how important. But after talking to the Air Force and Army it became pretty clear that getting the data faster is their fundamental desire. It’s something they’re looking for all of us out there in space to do.”

Stingray will send imagery via Ka band (26.5 to 40 GHz) which fits into the multi-domain sensor linking TITAN (Tactical Intelligence Targeting Access Node) and AMBS (Airborne Battle Management System) systems that the Army and Air Force are respectively developing. Its potential to cut out the middleman (i.e. ground processing stations), relaying imagery directly to tactical units/assets would surely be of interest to the services and is something that EA’s Smith hopes the Air Force will test Stingray on.

“Can we produce a viable product right off the satellite, transfer to the ground and have degrees of usability?”

Full image processing and analytics (for which the Air Force has many tools Smith points out) can still be done with Stingray’s optical data but images for mobile users in tactical environments need not always be perfect. Timeliness matters.

“The idea is that if you got an image of an area within five minutes, whatever you were interested in might still be there,” Smith says.

Seeing But Not Being Seen in VLEO

Colonel Eric Felt, director of the Air Force Research Laboratory Space Vehicles Directorate at Kirtland Air Force Base in New Mexico, says he’s an advocate of using all kinds of orbits, not just the traditional ones for imagery and communication

“I see VLEO as a new orbit that has potential for us. I’m really glad that [Earth Observant] is going after this mission area.”

Colonel Felt agrees that the resolution which satellites flying closer to Earth can deliver for smaller payload is desirable. It yields a cost per high-res image advantage that the Air Force is eager to leverage, he says. “More satellites and more capacity is definitely of interest to us.”

“The other thing I really like about VLEO is that it’s harder to track satellites in that orbit. First, they zoom overhead so fast. The angular velocity makes it difficult to track a satellite coming over you. Second, the resistance from the atmosphere makes it more difficult to predict where a given satellite is going to be at a certain point. We like that too.”

Felt also acknowledges that LEO is a busy place. “If LEO becomes crowded, why not go higher or lower? You have more freedom of operation in VLEO.”

Earth Observant’s proposed onboard image processing and edge computing is not unique to the company or to VLEO flight levels but it is of high interest to Air Force combatant commanders Col. Felt confirms.

In fact, the Air Force recently carried out an exercise in which it acquired all the available commercial satellite imagery it could find, taking data from 266 satellites. It then asked warfighters if the imagery was useful. The answer was a strong “yes,” citing the particular value of persistent imaging. Commanders also acknowledged that current timelines for processing and image delivery are too long.

“They just can’t wait hours to get their imagery,” Felt says.

Looking at the artwork above, you may note that Earth Observant stresses Stingray is capable of adjusting in-orbit altitude, has low cross-sectional area and is highly maneuverable.

Such attributes could be useful to the Air Force.

“The more you can maneuver, the less predictable your orbit is. That’s good,” Felt says. “A small cross-section is good too. If they can’t find you, they can’t tell that you’re [flying] overhead. If you really get into a shooting war, it’s harder for them to attack you or otherwise defeat you.”