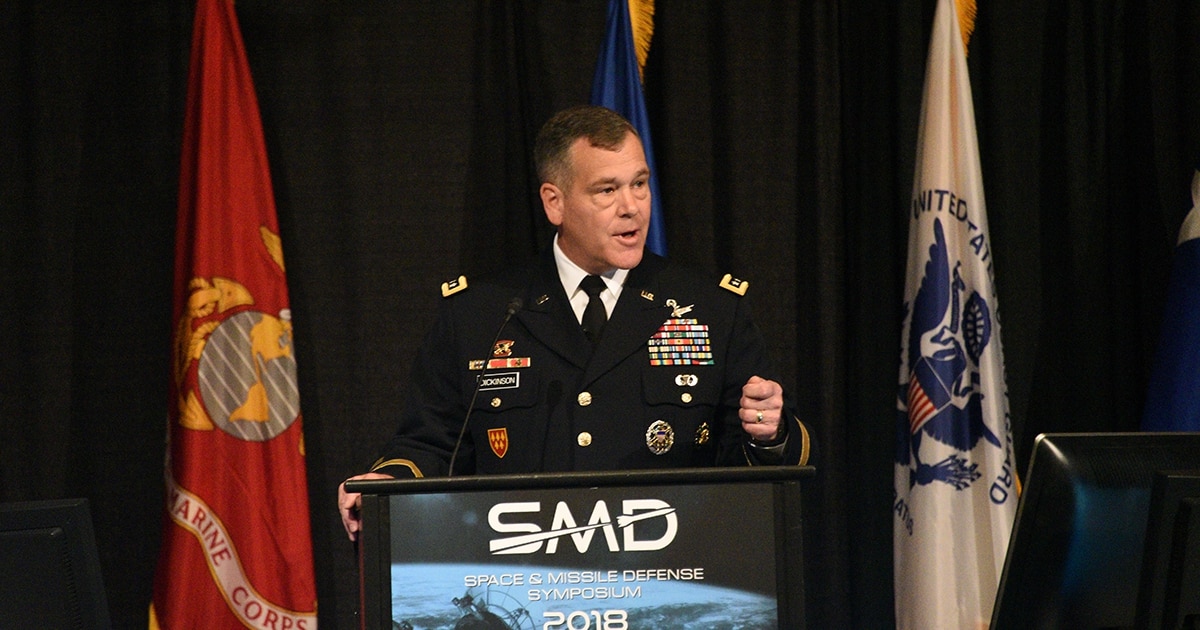 PETERSON AIR FORCE BASE, Colo. — Gen. James Dickinson on Aug. 20 took the reins of U.S. Space Command, becoming the second-ever leader of the organization and the first Army officer to hold the position.

Dickinson’s promotion signals a new era for Space Command, the military’s space operations arm established in August 2019, which will now have a commander solely dedicated to standing up a new unified command focused on protecting military space assets against new threats posed by Russia and China.

“To be clear, our objective is to deter conflict,” Dickinson said during the ceremony. Defense News traveled to the change-of-command ceremony with Defense Secretary Mark Esper.

For the past year, Space Command was led by Chief of Space Operations Gen. John “Jay” Raymond, who also held the position of the head of the Space Force, the new military service formed in December. That arrangement was intended to ensure that both organizations remained interlocked as they were established.

Space Force and Space Command are seen as complementary organizations, with the former training and equipping forces that will make up the core of Space Command’s warfighting cadre tasked with manning and operating the service’s satellites and space assets.

Both are still in their infancy, with major decisions about culture — everything from the Space Force uniforms to Space Command’s headquarters location — still to be determined.

“You have to have two different people doing this, because the organize, train and equip side [that Space Force does] can’t distract from the warfighting piece that Space Command does,” said Brig. Gen. Shawn Bratton, deputy director for operations at United States Space Command.

“Gen. Dickinson clearly has got the warfighting piece down. General Raymond continues with the standup of the Space Force. It lets those respective commanders have singular focus on the two different pieces without them clashing into each other.”

Asked by Defense News about the next steps to move Space Command to full operational capability, Dickinson — who has served as Raymond’s deputy since December — said that he would continue to pursue the current plan for standing up the organization.

The last week has been an eventful one for the Space Force and Space Command, with both swearing in a number of senior officials that will shape the direction of the organizations.

On Aug. 14, Lt. Gen. B. Chance Saltzman pinned on his third star and was promoted to the Space Force’s deputy chief of space operations, nuclear and cyber —becoming the 89th member of the Space Force and its second general officer after Raymond. That was followed on Aug. 17 with Lt. Gen. Nina Armagno swearing in as the first female general officer for the Space Force, taking the position of Raymond’s director of staff.

As more senior officials come onboard, the most consequential change for space operators is just being allowed a seat at the table as critical national security decisions are made, Saltzman told Defense News after his promotion ceremony.

“The Department of Defense is a big organization, and to get service-level attention on key issues, sometimes you just have to be in the room,” he said. “And a lot of times those rooms get filled up by very senior people, and if you’re not senior enough, you’re not in the room. That’s the big benefit of the Space Force: A Space Force perspective is in the room. My responsibility is to make sure we’re in the room for the operations discussions.”

Saltzman most recently served as acting director of the Space Force staff, coming off a yearlong deployment as deputy commander of U.S. Air Forces Central Command — a rare appointment for a space officer. In 2017, he was handpicked by former Air Force Chief of Staff Gen. Dave Goldfein to oversee a yearlong study on multi-domain command and control.

Those experiences will directly shape how he believes Space Force operators can add value in a combat scenario by better integrating with forces on the ground, at sea or in the air.

“I’m really going to lean on what I learned when I was out in the Middle East, watching how operations are done, how we decide if we’re achieving the effects we want or if there are some things we can do differently to get better effects,” Saltzman said.

“It starts with figuring out how to integrate both the experts that are out there, the data that they use, and then the weapon systems that we employ,” he said. “We can get caught up in little clusters of excellence. The fighters are doing great things for air superiority and the intel people are collecting [intelligence,] and they share, but there are ripe opportunities to try to get better integration across all the domains, all the data that is available so that we can produce the maximum number of options for our decision makers.”

Money Minute — When Should You Close a Credit Card?