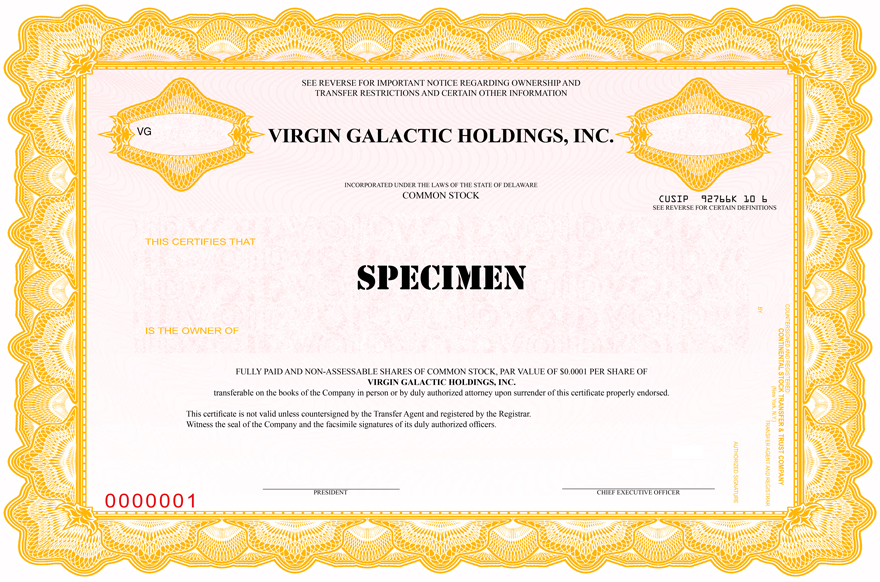 At some point in the not-too-distant future, the global space industry will be worth $1.1 trillion — maybe as much as $1.8 trillion — according to the space analysts at investment bank Morgan Stanley.

And now there’s a pure-play way to invest in that: Virgin Galactic (NYSE:SPCE), shares of which began trading last week.

We first told you about space tourism company Virgin Galactic’s plans to go public — without actually doing an IPO — back in July. Taking an unconventional route to the public markets, Virgin Galactic would first sell half its shares to publicly traded shelf-company Social Capital Hedosophia Holdings (SCH), then reverse-merge into SCH and label the entire combined company “Virgin Galactic.”

Now that Virgin Galactic is public and its shares have had a few days to trade around a bit, we thought you might like to know a bit more about “the world’s first and only publicly traded commercial human spaceflight company” (their words, not mine).

The good news is that by the end of the week, short-sellers apparently decided they had made enough money, and bought back some shares. But in the end, Virgin Galactic stock was down 18% in its first week of trading.

Hardly the result Sir Richard Branson — or investors — had hoped for.

2. Virgin Galactic has almost no revenue, but lots of losses

Why are investors starting to sour on Virgin Galactic stock? Part of the reason may be that they’ve finally gotten a good, close look at its numbers. You see, the day after it began trading, Virgin Galactic filed an “8-K” report with the SEC, which included an “unaudited, pro forma, condensed” review of some of its financial information.

Among the revelations from this document: Virgin Galactic has almost no revenue — but lots of losses.

Admittedly, coming from a company that has yet to make its first commercial spaceflight, this shouldn’t be too surprising. But for investors with only a passing familiarity with Virgin Galactic’s status, the numbers might have come as a bit of a shock.

Over the first six months of 2019, this company with an $1.8 billion market capitalization (that’s S&P Global Market Intelligence‘s latest estimate) has booked only $2.4 million in sales — and racked up $96.4 million in net losses.

3. Virgin Galactic has lots of cash

The good news is that for the time being at least, Virgin Galactic is in a good position to absorb these losses as it awaits its first commercial spaceflight (now expected to take place sometime in 2020).

Thanks largely to the cash that came with SCH’s investment, Virgin Galactic now boasts a $536.6 million bank account, and no long-term debt. Almost all of its debts are short-term in nature, and the bulk of them ($81.1 million) consist of customer deposits — obligations the company should quickly begin satisfying once it begins flying tourists to space commercially.

That’s about it from the perspective of “dollars-and-cents” revelations from the report. No mention of free cash flow. No guidance for what to expect the numbers to look like going forward. (As I mentioned, Virgin gave us only an “unaudited, pro forma, and condensed” snapshot.) But one other revelation bears examination.

After all, beginning next year, and for years to follow, Virgin planes will be making regular flights at ultra-high altitudes and hypersonic velocity. In so doing, they’re bound to learn interesting things about how passenger airplanes perform at very high speeds, in very thin atmospheres. Indeed, Virgin Galactic’s CEO says this will be an “exciting part” of Virgin’s business in future years. Over and above the excitement of flying into space, the path Virgin spacecraft take to get to space could blaze a new trail for intercontinental passenger transport, cutting travel times between Los Angeles and Tokyo from 11 hours … to just two hours.

(Commenting on this aspect of the business earlier this year, investment bank UBS opined that while Virgin Galactic’s primary reason for being — space tourism — might become a $3 billion industry a decade from now, hypersonic business travel could be worth as much as $20 billion annually.)