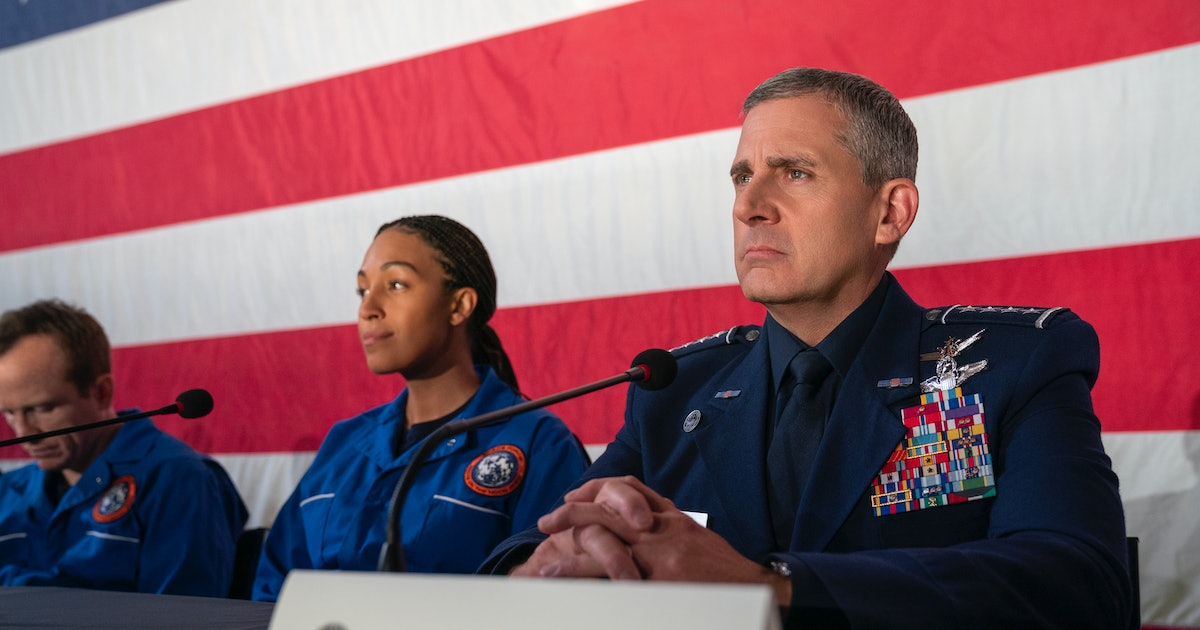 Space Force, the latest show on Netflix from Office co-creator Gregg Daniels, appears to be a popular — if not critical — hit. As of June 3, 2020, using Netflix’s own proclamations, the show is Number #1 on the streaming service:

The show brings up some fascinating science regarding the Moon. Near the end of its first season, which stars Steve Carrell and John Malkovitch, the titular Space Force finds itself in a race with China to find a substance known as helium-3. While much of Space Force is divorced from reality, helium-3 is very real.

Starting with the high school basics: helium is the second most abundant element in the universe. It’s colorless, tasteless and odorless. Around 24 percent of the universe is helium. The most common type of helium is known as helium-4, due to its having two neutrons and two protons.

Helium-4 is pretty much humanity’s experience with the element, considering that 99.99986 percent of all helium on Earth is like this. But in 1934, experimenting with that’s known as heavy hydrogen, the Australian scientist Mark Oliphant hypothesized that what many had thought was a radioactive isotope would in fact be found in natural helium. Oliphant was proposing that a stable isotope of helium, with two protons but only one neuton, existed. In 1939, American physicists Luis Alvarez and Robert Cornog confirmed his suspicions with the definitive discovery of 1939.

A young Luis Alvarez, right, in 1933. Five years later, he confirmed the existence of helium-3.Wikimedia/Public Domain

Helium-3 is primordial, dating back to a planetary body’s earliest days. On Earth, it formed in the mantle of the planet, above the core and below the crust. While it can be made artificially, it’s an incredibly rare substance on Earth: a report from 2011 showed that, in total, .01 metric tons of helium 3 exist on Earth, and it only comprises .0001 percent of the American government’s helium reserve.

It’s possible to make helium-3 artificially — it occurs whenever a nuclear weapon is dismantled, for example. But the United States stopped making it back in 1988.

Why is helium-3 important?

Helium-3 has rare and valuable properties, like the ability to reduce temperatures to near absolute zero. That could be tremendously useful in cryogenics, and even offer a non-radioactive alternative to medical imaging. It could also be used to detect nuclear weapons.

But the use most sought-after is energy. Helium-3 could produce what is known as nuclear fusion, which is different than the nuclear fission we commonly see with nuclear reactors today. As Christopher Barnatt explains on his site Explaining The Future, “nuclear fusion effectively makes use of the same energy source that fuels the Sun and other stars, and does not produce the radioactivity and nuclear waste that is the by-product of current nuclear fission power generation.”

Helium-3 could unlock the type of nuclear fusion seen on the Sun right here on Earth. There are many challenges to go in that process.Solar Dynamics Observatory, NASA

However, nuclear fusion is complex: it’s a challenge to capture what are known as “fast” neutrons that are released during the process, creating energy waste. Helium-3 solves this problem with its name: it only has one neutron, and there’s nothing fast about it. It could be a perfect fuel.

Does helium-3 exist on the Moon?

In Space Force, scientists note that helium-3 is abundant on the Moon. They’re right. In 1986, scientists estimated that there are one million tons of helium-3 to be found in the lunar soil, which is called regolith.

Why hasn’t anyone brought it back yet?

First of all, going to the Moon is hard. Going there with people is even harder — only 12 people have ever stepped foot on its surface, all part of NASA’s Apollo missions. But scientists knew about helium-3 back then, so why wasn’t America swimming in the stuff after those missions?

There’s the hard matter of actually mining it and bringing it back, for one thing. As OpenMind notes, “the Moon has accumulated an incredible amount of this material in its surface layer, although at such a low concentration that it would be necessary to process enormous quantities of regolith to harvest it by heating it at 600 °C (1,112 F).”

An academic paper from 2014 presented at the 40th COSPAR Scientific Assembly in Moscow, titled “Feasibility of lunar Helium-3 mining,” explored the many difficulties.

“The required heating power, if mining both day and night, would add up to 39 GW. The resulting power system mass for the lunar operations would be in the order of 60,000 to 200,000 tons. A fleet of three lunar ascent/descent vehicles and 22 continuous-thrust vehicles for orbit transfer would be required. The costs of the mission elements have been spread out over expected lifetimes,” the paper’s abstract notes.

The scientists concede that “technically, the mission is extremely challenging and complex.” However, they say, “most required technologies exist or could be developed within a reasonable time span.”

Who is mining helium-3 in the real world?

In Space Force, American scientists suspect that the Chinese government is mining helium-3, although this suspicion is never confirmed. Does this plot point have real-world truth behind it? Yes, but it might be outdated.

Articles published in 2016 from PBS and Space Safety Magazine both note that China is exploring helium-3. Space Safety quotes Professor Ouyang Ziyuan, the chief scientist of the Chinese Lunar Exploration Program (CLEP), saying that helium-3 could “solve humanity’s energy demand for around 10,000 years at least.”

But since then, officials from the Communist Party have mostly remained quiet about the task, perhaps realizing its difficulty.

Some countries think it’s a pipe dream. Alexander Bloshenko, executive director for research programs and science at Russia’s corporation Roscosmos, said in 2019 that “for the time being this possibility looks nothing more than science fiction.”

Right now, the biggest player in helium-3 looks to be India. So far India has sent two non-manned lunar exploration missions into space, Chandrayaan-1 and Chandrayaan-2. While Chandrayaan-2 crashed on landing, both missions were meant to explore the possibilities of helium-3.

K Sivan, chairman of the Indian Space Research Organization (ISRO), said in 2018 that “the countries which have the capacity to bring that source from the moon to Earth will dictate the process. I don’t want to be just a part of them, I want to lead them.’’

While the ISRO’s space program does appear in Space Force, there’s no mention of the country’s helium-3 ambitions. Maybe next season.