We Were Warned This Day Would Come

Every product was carefully curated by an Esquire editor. We may earn a commission from these links.

Netflix’s new comedy Space Force is a Greg Daniels and Steve Carell team-up meant to satirize Donald Trump’s new military branch of the same name, which is honestly doing a pretty fine job of that all on its own. The show—which stars Carell, John Malkovich, Ben Schwartz, Diana Silvers, and Tawny Newsome—is tinged with too much sincerity for many of its jokes to land. But one that does is a bit in Episode Two, in which a monkey and dog (who were abandoned in space after their mission to “obtain cute footage” was accomplished) are suddenly tasked with a space repair mission.

In “SAVE EPSILON 6!,” a Space Force satellite is attacked by a Chinese satellite, and two panels are detached. The Space Force crew quickly convenes in the night to brainstorm a solution to reattach them. General Naird (Carell) rejects the logical ideas put forth by scientists and decides that it should be up to the monkey, Marcus, and dog, Theodore, to repair the spacecraft. 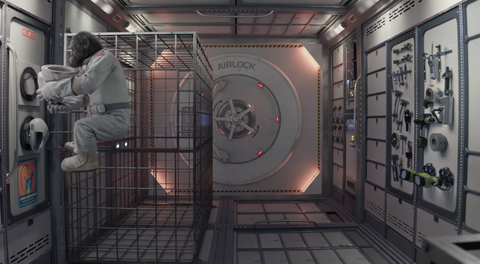 While no animals have actually repaired any satellites or been kidnapped by Chinese spacecrafts as we see in Space Force, scientists actually do have a long, weird, often sad, history of experimenting with animals in space. This practice has been met with criticism from animal rights activists over the decades, but according to NASA: “These animals performed a service to their respective countries that no human could or would have performed. They gave their lives and/or their service in the name of technological advancement, paving the way for humanity’s many forays into space.”

Here are some of the most strange and notable ones:

In the 1940s scientists first began experimenting with sending animals into space to pave the way for human exploration. Albert I, the first of these test animals, died of suffocation during his flight in 1948. In the years that followed, both the U.S. and Russia sent dozens of monkeys and dogs into space, most of whom—as is depicted in Space Force—did not survive. The first monkey to survive the trip was named Yorick. He, along with a crew of 11 mice, were recovered following their flight from an air force base in New Mexico in 1951, although he died several hours after landing. Ham, a chimpanzee who was sent to space in 1961, is often referred to as the first monkey sent to space. But, there is some debate over this, given the early history of animals in space. As Vice explains:

As space historians like Amy Shira Teitel have noted, the early Albert monkeys are often forgotten “unsung heroes” of the American space program, overshadowed by the starpower of Miss Baker, or Mercury Program astro-chimpanzees Ham and Enos. But the early sacrifices made by these six pioneering Alberts formed the bedrock of crewed spaceflight in the United States, and gave their human relatives the boost they needed to leave primate footprints on the Moon.

The first animal to survive the trip into space and continue to live afterwards was the 1-pound squirrel monkey Miss Baker in 1959. She lived until 1984, when she died at the age of 27, and she is buried at NASA’s Space and Rocket Center in Alabama. Miss Baker was nicknamed TLC because she supposedly appreciated being handled with tender loving care (who among us!) and because of her “intelligence and loving, docile manner.” In addition to being a female icon, she is also extremely tiny and adorable. To this day, fans leave bananas on her tombstone. 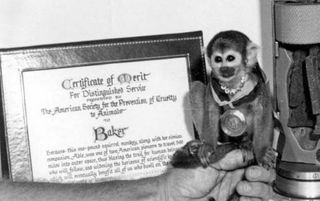 France launched the first and only cat into space in 1963—Félicette, who sounds extremely chic, experienced weightlessness and was successfully recovered following her mission. In 2017, a man stumbled across a tea towel commemorating Félicette’s journey to space, and was astounded that the French cat’s legacy had been largely forgotten. In an effort to right this wrong, he began a Kickstarter campaign that raised more than $57,000 to erect a statue of her in celebration. Today, her bronze replica is on display at the International Space University in Strasbourg and she upholds the legacy of brave female animals in space. 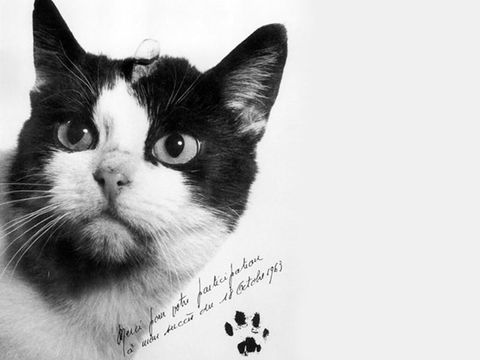 After Apollo 11 landed man on the moon in 1969, the range of species broadened to include rabbits, turtles, insects, spiders, fish, jellyfish, amoebae, and algae. Anita and Arabella, two spiders sent to space in 1973, made headlines when they successfully spun webs in space. In the 1990s, NASA bred jellyfish in space and brought the babies back to Earth to determine how they might adjust to gravity (spoiler: not well). Sadly, the space-jellyfish had trouble moving around and orienting themselves. Frogs, salamanders, and sea urchins have also been bred in space, and fish and tadpoles have been sent to the International Space Station as well, to see how microgravity impacts them.

We hope the kidnapped monkey Marcus, whom we never hear of or see again following his capture in Episode Two of Space Force, had better luck than most of the real chimpstronauts over the years.

Lauren Kranc is an editorial assistant at Esquire, where she covers pop culture and television, with entirely too narrow of an expertise on Netflix dating shows.