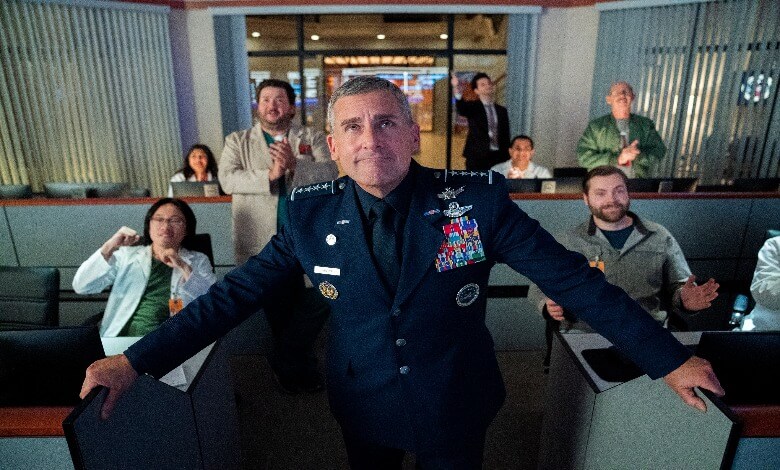 There’s an awful lot of projection going on in the Netflix comedy “Space Force.”

So… how much did this disaster set Netflix back?

Carell’s salary alone was reportedly $10 million for co-writing, co-creating and starring in this mess. The show itself likely cost more, with lavish production design and a killer cast which couldn’t have come cheaply.

Sometimes you have to break the bank to help humanity, as Carell’s character semi-wisely argues in one “Space Force” exchange. Other times you get “Ishtar,” “Heaven’s Gate” or, regrettably, “Space Force.”

(Note: This critic watched four of the show’s first 10 episodes.)

Carell, re-teaming with “The Office” creator Greg Daniels, plays the man tasked with leading an unseen POTUS’s Space Force mission. The show never actually mentions Trump by name, but it’s obvious who the target is.

He’s like Voldemort in Hollywood — his name cannot be spoken!

Carell’s Mark Naird is a four-star general in way over his head with the new mission. Or is he? Much of the time General Naird is as dumb as Lt. Frank Drebin of “Police Squad.”

Until he’s not. You can practically see the switch being thrown on Carell’s character. Homer Simpson dumb to Alex P. Keaton smart.

Arguably the biggest problem is how the show doesn’t understand the main character. He’s alternately idiotic and sweet, a doting, overmatched dad and a simpleton who think dogs can fix complex space equipment.

The latter may be the most expensive, CGI-laden gag ever made for a TV project, and the laugh-to-cash ratio is embarrassingly small.

RELATED: Condescending ‘Vice’ Trips on Its Own Propaganda

General Naird must juggle a smarmy rival (the sublime Noah Emmerich), cost-conscious Congressmen, PR pressures and more. Plus, he’s essentially a single dad to a grating, entitled teen (Diana Silvers) because his wife is rotting in jail for a good long while.

That’s the great Lisa Kudrow stuck in the slammer to sling tired prison jokes and riff on cultural appropriation. Why is she in jail? Oh, the show keeps it a secret! Why make her character a jailbird in the first place? That’s a secret, too, because it’s nonsensical and bears little comic fruit.

The best we can say about “Space Force” is that John Malkovich gets oodles of screen time as Dr. Adrian Mallory. He’s the scientific thorn in General Naird’s side, a reminder how this administration treats science like an unwanted rash.

Only the Mallory-Naird connection evolves beyond that talking point, and Malkovich is irresistible in the part.

Woke Culture is throttling comedy in 2020, something even Malkovich himself admitted recently. Case in point: About every eight to 10 minutes we get a gag meant to appease progressive viewers. Consider:

You wanna score lazy ideological points? Have at it. Can we make the show itself worth a darn at the same time?

Early on we’re told POTUS is verrrrry friendly with Russia. It’s as if the recent Russia collusion hoax revelations never happened — the show was probably in the can at the time. There’s no excuse for missing the stink bomb that was the Mueller Report, though.

Get it? How much did that gag cost?

Hollywood hasn’t lobbed a single jab at the absurdly overmatched politician in two years. “Space Force” is no different so far. Wonder why? Wonder no more!

The show’s concept, as the creators admitted but backtracked from, is all about mocking Trump’s space ambitions. It doesn’t end there. The show routinely brings up “POTUS” in an unflattering light, from Twitter misspellings to unrealistic “boots on the Moon” rhetoric.

Episode 4 drags “FLOTUS” into the hilarity, as the First Lady’s team demands it design the Space Force uniform. The show can’t even get this satirical nugget right. Melania Trump has been a mostly hands off First Lady, focusing on kind messaging and her “Be Best” campaign. Plus, she’s a veteran model with style and elegance to burn — even if no fashion magazine will let her show it.

Again, if the comic subplot had any laughs it wouldn’t matter what you think of her or her husband.

Adding insult to so much injury is what may be Fred Willard’s last screen appearance. The comic legend, looking frail and trembling, is given a few dementia gags to embody as General Naird’s father in episode one.

Twice in the first four episodes General Naird breaks into song. The show’s trailer made one of those moments winning and wise. Not here.

Likely most of “Space Force,” the moments are embarrassing, humorless and dumb.