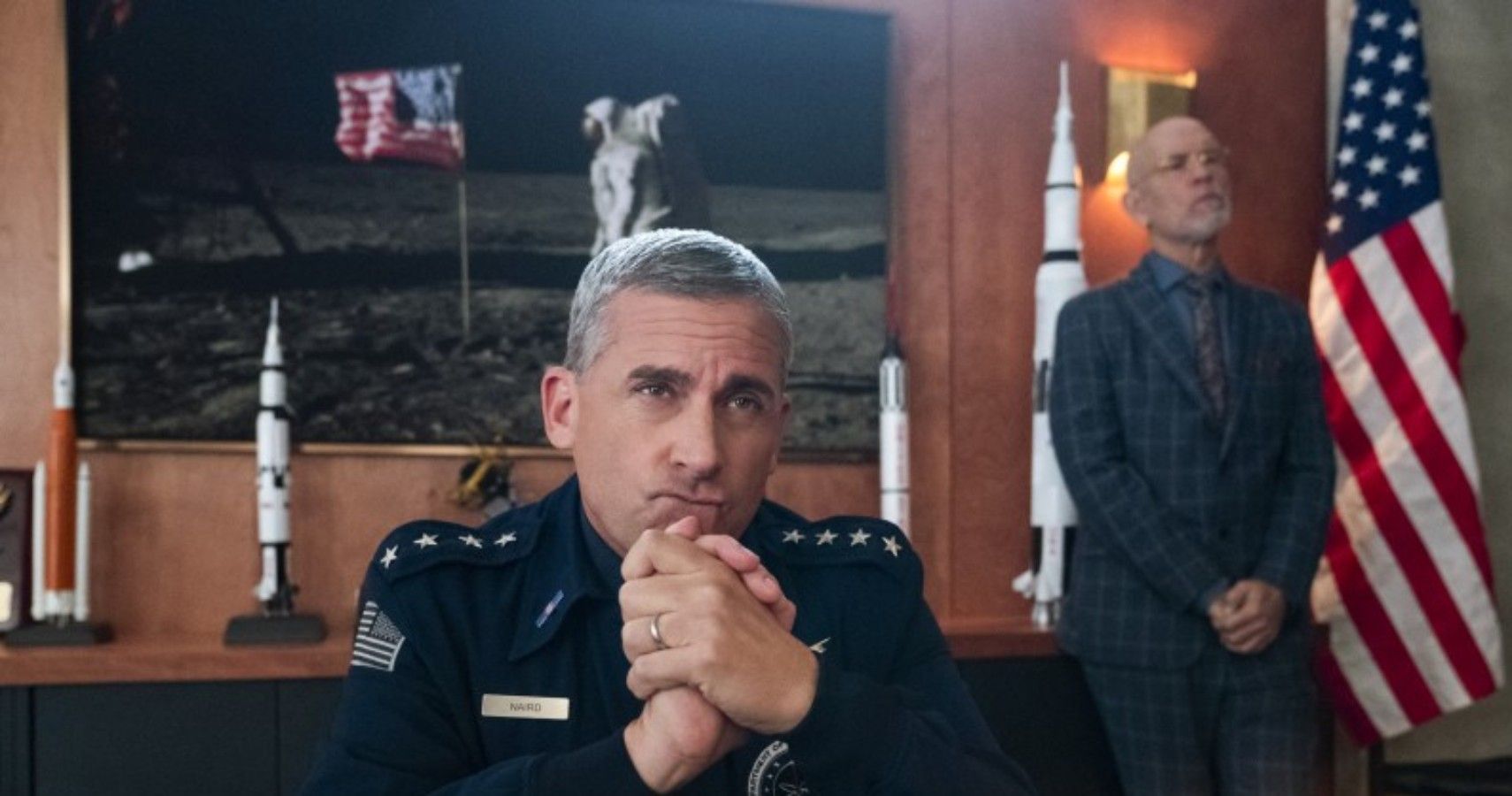 Netflix’s new comedy Space Force is so funny it’s quotable. Here are 10 of the best quotes from season one.

Space Force, the diverting new workplace comedy from Netflix, stars Steve Carell and John Malkovich as General Naird and Dr. Mallory who, despite their distaste for one another, are tasked with creating the U.S. Space Force. Part political satire, part sci-fi homage, hilarity ensues when Naird’s can-do grit chaffs against Mallory’s fastidious intellectualism, with their unsuspecting colleagues and families caught in the crossfire.

RELATED: Steve Carell’s 10 Best Roles: Ranked From Most Comedic To Most Serious

As a version of his famous character on The Office Carell is predictably funny, especially when he gives his dialogue a steely bite that would make Clint Eastwood proud. Malkovich is surprisingly humorous because of the sardonic jauntiness he brings to his lines, and the joint chiefs of staff are comprised of comedic heavy hitters Jane Lynch, Patrick Warburton, and Diedrich Bader delivering zinger after zinger. The jokes don’t always land, but when they do it’s with all the precision of the Falcon 9.

10 “Gender roles, offensive and out of date, just like you.”

When General Mark Naird is made a four star general, the affair isn’t as lavish as what he’s accustomed to, but it gains him access to meetings with the joint chiefs of staff. He becomes privy to confidential information, along with his rival Kick Grabaston.

RELATED: Marvel: 10 Genderbent Deadpool Cosplay You Have To See

When Naird informs Grabaston of his promotion, Grabaston makes an off-color remark about Naird wearing a dress. Ever the equitable sort, Niard delivers this line without flinching.

By the time the satellite finally launches, it’s a happy day at Space Force HQ. General Naird and Dr. Mallory are even able to get over their differences and share a glass of bourbon to celebrate – that is, until the panels off the satellite are stolen in orbit by -they suspect- another world power.

This instantly sends them back to HQ where they break off into teams and formulate a plan to reattach the panels before it’s too late. That’s when Naird utters this classic line, in reference to the Apollo 13 mission that almost ended in tragedy.

General Naird makes an inspirational speech to aspiring cadets of the Space Force program, outlining the POTUS’s goal of having “boots on the moon by 2024” and how Space Force will propel the United States into a new era of national pride through intrepid space exploration.

He concludes his remarks by asking the gathering of insipid youth whether or not they’re going to shirk their apathy with this question, which while said with the best of intentions could use a little polishing.

One of the highlights of the series is the animosity between Dr. Mallory and General Naird, inspired by the real-life ire burgeoning even now between branches of them military and the scientists that they coordinate with on certain projects for the national benefit.

At once point, Dr. Mallory questions the budget of Dr. Naird and the rest of the joint chiefs of staff gathered at a Congressional budget hearing. Never one to mince words, his line of inquiry is laced with cynicism and irony.

The meeting of the joint chiefs of staff comprises some of the most hilarious scenes on the series, especially since every general representing the armed forces of the United States of America is played by a notable character actor, including Jane Lynch.

As the Chief of Naval Operations, she shoots down any mention of her gender with quotes designed to pierce the hulls of even the most formidable subs. She makes it clear her gender has nothing to do with her fulfilling her duties to her nation.

5 “I’m going to reabsorb your budget like the world’s most useful tampon.”

There’s no question that a festering dogmatism exists between General Kirk Grabaston and General Naird, and when in the same room they quickly resort to name calling and schoolyard bullying.

Even when summoned for a Congressional budget hearing, the pair can’t resist getting in a few well-aimed jabs at one another. Grabaston tries to antagonize Naird with this distasteful -if not humorous- remark, which quickly falls apart as their verbal pummeling continues.

4 “Cheap generals are like cheap enchiladas – you end up paying for it on the back end.”

When summoned for the budget hearing on Capitol Hill, General Naird doesn’t rely on what he perceives to be polysyllabic rhetoric designed to confuse the panel. He gets down to brass tacks and speaks with candor, especially about his fellow four-stars.

He views “cheap generals” like General Grabaston like he views “cheap enchiladas”, and acknowledges that they make look appealing on first sight, but on the back end and in private, they’re excessively expensive for how obstructive they are.

The slogan for the U.S. Space Force, as provided to General Naird by the POTUS is “Boots on the Moon In 2024”, which he recites emphatically throughout the series.

What he begrudgingly adds is that the original phrase was “Boobs on the Moon In 2024”, as sent via text from the POTUS, who tweets constantly throughout the series much to the chagrin of Naird and Dr. Mallory.

When Dr. Mallory recounts the sort of mental fortitude it takes to be part of a lunar habitat, Dr. Chan equates it to the sort of psychological testing required of Navy submariners submerged for long periods of time.

Dr. Chan explains to General Naird exactly why he feels it would take someone of uncharacteristic “superior mental fitness” to be able to survive in isolation with so many grown men and their habits.

1 “You take away my sourdough bread, you’re gonna get poisoned”

It’s never explained why exactly Maggie Naird is in prison, but her husband visits her every chance he gets, especially for conjugal visits. She makes it clear that she’ll be spending forty years behind bars, perhaps longer, but that she’s safe because she’s respected.

That respect has come at a cost to her character, and she’s earned quite a reputation for herself. Anyone steals sourdough bread from Maggie Naird, and she has no problem poisoning the thief.

NEXT: Netflix’s Space Force: 10 Other TV Shows Featuring The Cast

Next The Walking Dead: 10 Ways It Changed (For The Better) After Season 1

Kayleena has been raised on Star Wars and Indiana Jones from the crib. A film buff, she has a Western collection of 250+ titles and counting that she’s particularly proud of. When she isn’t writing for ScreenRant, CBR, or The Gamer, she’s working on her fiction novel, lifting weights, going to synthwave concerts, or cosplaying. With degrees in anthropology and archaeology, she plans to continue pretending to be Lara Croft as long as she can.