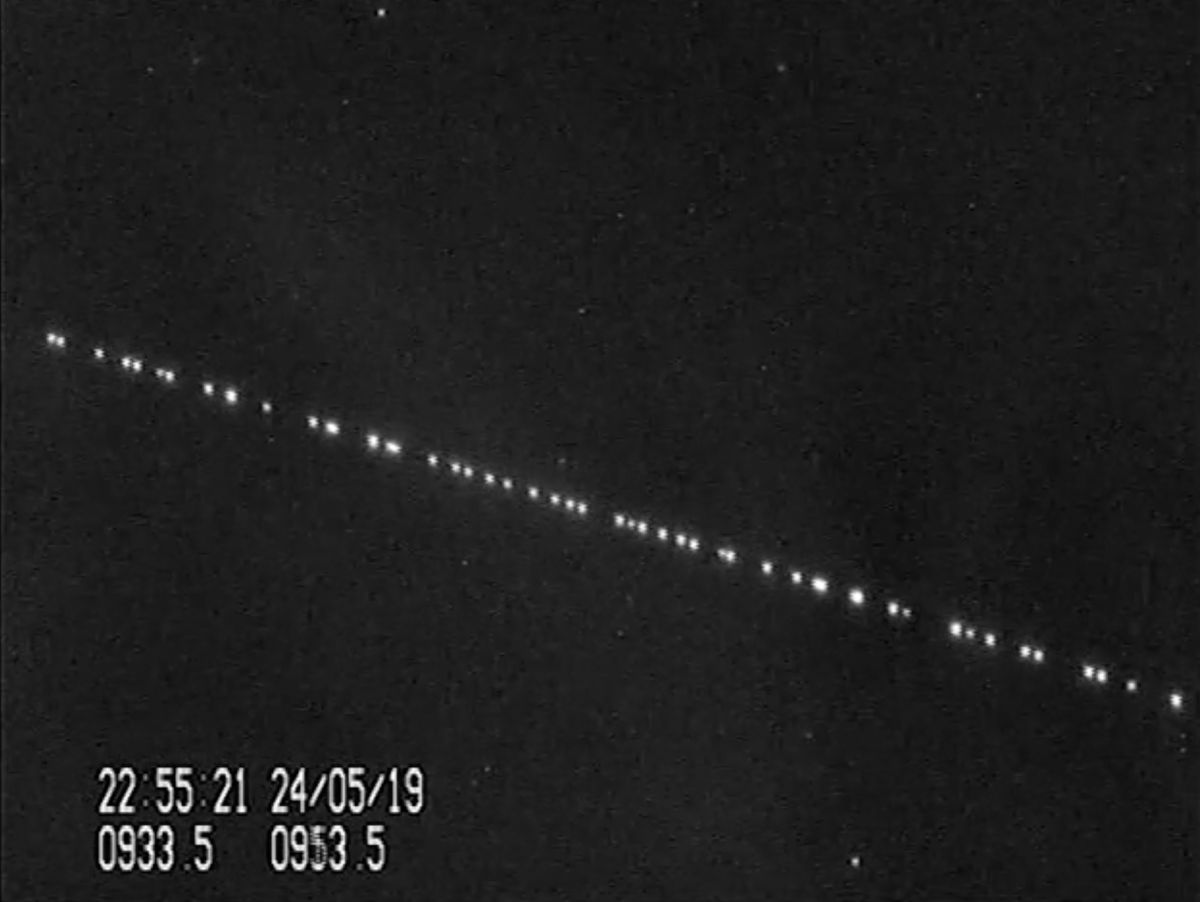 Starlink is the name of a satellite network that the private spaceflight company SpaceX is developing to provide low-cost internet to remote locations. While SpaceX eventually hopes to have as many as 12,000 satellites in this so-called megaconstellation, the size and scale of the project have flustered astronomers and amateur skywatchers, who fear that the bright, orbiting objects will interfere with observations of the universe.

SpaceX’s satellite internet proposal was announced in January 2015. Though it wasn’t given a name at the time, CEO Elon Musk said that the company had filed documents with international regulators to place about 4,000 satellites in low Earth orbit.

“We’re really talking about something which is, in the long term, like rebuilding the internet in space,” Musk said during a speech in Seattle when revealing the project.

Musk’s initial estimate of the number of satellites soon grew, as he hoped to capture a part of the estimated $1 trillion worldwide internet connectivity market to help achieve his Mars colonization vision. The U.S. Federal Communications Commission (FCC) has granted SpaceX permission to fly 12,000 satellites and perhaps as many as 30,000 eventually.

To put that into perspective, only about 2,000 artificial satellites currently orbit Earth, and only 9,000 have ever been launched in all of history, according to the United Nations Office for Outer Space Affairs.

SpaceX launched its first two Starlink test craft, named TinTinA and TinTinB, in 2018. The mission went smoothly. Based on initial data, the company asked regulators for its fleet to be allowed to operate at lower altitudes than originally planned, and the FCC agreed.

The first 60 Starlink satellites were launched on May 23, 2019, aboard a SpaceX Falcon 9 rocket. The satellites successfully reached their operational altitude of 340 miles (550 kilometers) — low enough to get pulled down to Earth by atmospheric drag in a few years so that they don’t become space junk once they die.

SpaceX’s first 60 Starlink internet communications satellites are released all at once in this animation of images taken during the successful May 23, 2019 launch from Cape Canaveral Air Force Station, Florida. (Image credit: SpaceX)

Each Starlink satellite weighs 500 lbs. (227 kilograms) and is roughly the size of a table, according to Sky & Telescope magazine.

Rather sending internet signals through electric cables, which must be physically laid down to reach far-flung places, satellite internet works by beaming information through the vacuum of space, where it travels 47% faster than in fiber-optic cable, Business Insider reported.

Current satellite internet works using large spacecraft that orbit 22,236 miles (35,786 km) above a particular spot on the Earth. But at that distance, there are generally significant time delays in sending and receiving data. By being closer to our planet and networking together, Starlink’s satellites are meant to carry large amounts of information rapidly to any point on Earth, even over the oceans and in extremely hard-to-reach places where fiber-optic cables would be expensive to lay down.

Musk said the Starlink network would be able to provide “minor” internet coverage after 400 spacecraft were up and running, and “moderate” coverage after about 800 satellites became operational.

Within days of the first launch, skywatchers spotted a linear pearl string of lights as the satellites whizzed overhead in the early morning. Web-based guides showed others how to track down the spectacular display.

“This was quite an amazing sight, and I was shouting ‘Owowowow!’ when the bright ‘train’ of objects entered into view,” Netherlands-based satellite tracker Marco Langbroek previously told Space.com via email. “They were brighter than I had anticipated.”

That brightness was a surprise to almost everyone, including both SpaceX and the astronomical community. Researchers began to panic and shared photos of satellite streaks in their data, such as this one from the Lowell Observatory in Arizona.

They expressed particular concerns about future images from highly sensitive telescopes such as the Vera Rubin Observatory (formerly known as the Large Synoptic Survey Telescope), which will study the entire universe in exquisite detail and is expected to come online in 2022. Radio astronomers are also planning for interference from Starlink’s radio-based antennas.

The International Astronomical Union expressed concerns in a statement released in June 2019. “Satellite constellations can pose a significant or debilitating threat to important existing and future astronomical infrastructures, and we urge their designers and deployers as well as policy-makers to work with the astronomical community in a concerted effort to analyse and understand the impact of satellite constellations,” the statement said.

SpaceX received more backlash in September 2019, when the European Space Agency (ESA) announced that it had directed its Aeolus satellite to undertake evasive maneuvers and avoid crashing into “Starlink 44,” one of the first 60 satellites in the megaconstellation. The agency took action after learning from the U.S. military that the probability of a collision was 1 in 1,000 — 10 times higher than ESA’s threshold for conducting a collision-avoidance maneuver.

What SpaceX plans to do

SpaceX has stated that it will work with organizations and space agencies to mitigate the impacts of its megaconstellation and has continued its deployment of Starlink. The company launched a second batch of satellites in November 2019 and a third in January 2020, and it expects to begin broadband internet service by the end of 2020.

SpaceX has tried to assuage astronomers’ concerns over Starlink’s effect on the night sky. In the January 2020 batch, one Starlink satellite, called DarkSat, was painted in an experimental partially black coating designed to reduce its brightness.

“SpaceX is absolutely committed to finding a way forward so our Starlink project doesn’t impede the value of the research you all are undertaking,” Patricia Cooper, SpaceX’s vice president of satellite government affairs, told astronomers at a January 2020 meeting of the American Astronomical Society in Honolulu, Nature reported.

But the huge numbers of satellites in megaconstellations from SpaceX and other private space companies, such as OneWeb, suggest that these issues will continue, and advocates have called for greater regulations from government agencies.

“Here is a gift for the leaders of the world, a task more non-partisan than any other which has come before: protect our skies,” stargazer Arwen Rimmer wrote in The Space Review, a weekly online publication devoted to essays and commentary about space, in early 2020.