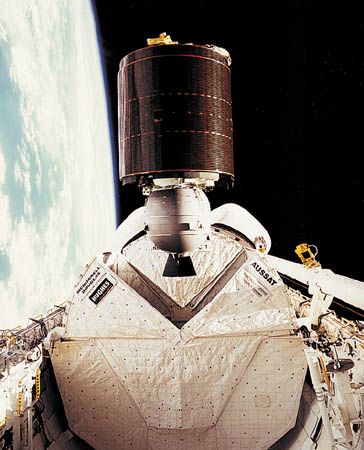 A satellite is basically a self-contained communications system with the ability to receive signals from Earth and to retransmit those signals back with the use of a transponder—an integrated receiver and transmitter of radio signals. A satellite has to withstand the shock of being accelerated during launch up to the orbital velocity of 28,100 km (17,500 miles) an hour and a hostile space environment where it can be subject to radiation and extreme temperatures for its projected operational life, which can last up to 20 years. In addition, satellites have to be light, as the cost of launching a satellite is quite expensive and based on weight. To meet these challenges, satellites must be small and made of lightweight and durable materials. They must operate at a very high reliability of more than 99.9 percent in the vacuum of space with no prospect of maintenance or repair.

The main components of a satellite consist of the communications system, which includes the antennas and transponders that receive and retransmit signals, the power system, which includes the solar panels that provide power, and the propulsion system, which includes the rockets that propel the satellite. A satellite needs its own propulsion system to get itself to the right orbital location and to make occasional corrections to that position. A satellite in geostationary orbit can deviate up to a degree every year from north to south or east to west of its location because of the gravitational pull of the Moon and Sun. A satellite has thrusters that are fired occasionally to make adjustments in its position. The maintenance of a satellite’s orbital position is called “station keeping,” and the corrections made by using the satellite’s thrusters are called “attitude control.” A satellite’s life span is determined by the amount of fuel it has to power these thrusters. Once the fuel runs out, the satellite eventually drifts into space and out of operation, becoming space debris.

A satellite in orbit has to operate continuously over its entire life span. It needs internal power to be able to operate its electronic systems and communications payload. The main source of power is sunlight, which is harnessed by the satellite’s solar panels. A satellite also has batteries on board to provide power when the Sun is blocked by Earth. The batteries are recharged by the excess current generated by the solar panels when there is sunlight.

Satellites operate in extreme temperatures from −150 °C (−238 °F) to 150 °C (300 °F) and may be subject to radiation in space. Satellite components that can be exposed to radiation are shielded with aluminium and other radiation-resistant material. A satellite’s thermal system protects its sensitive electronic and mechanical components and maintains it in its optimum functioning temperature to ensure its continuous operation. A satellite’s thermal system also protects sensitive satellite components from the extreme changes in temperature by activation of cooling mechanisms when it gets too hot or heating systems when it gets too cold.

Communication satellites range from microsatellites weighing less than 1 kg (2.2 pounds) to large satellites weighing over 6,500 kg (14,000 pounds). Advances in miniaturization and digitalization have substantially increased the capacity of satellites over the years. Early Bird had just one transponder capable of sending just one TV channel. The Boeing 702 series of satellites, in contrast, can have more than 100 transponders, and with the use of digital compression technology each transponder can have up to 16 channels, providing more than 1,600 TV channels through one satellite.

Satellites operate in three different orbits: low Earth orbit (LEO), medium Earth orbit (MEO), and geostationary or geosynchronous orbit (GEO). LEO satellites are positioned at an altitude between 160 km and 1,600 km (100 and 1,000 miles) above Earth. MEO satellites operate from 10,000 to 20,000 km (6,300 to 12,500 miles) from Earth. (Satellites do not operate between LEO and MEO because of the inhospitable environment for electronic components in that area, which is caused by the Van Allen radiation belt.) GEO satellites are positioned 35,786 km (22,236 miles) above Earth, where they complete one orbit in 24 hours and thus remain fixed over one spot. As mentioned above, it only takes three GEO satellites to provide global coverage, while it takes 20 or more satellites to cover the entire Earth from LEO and 10 or more in MEO. In addition, communicating with satellites in LEO and MEO requires tracking antennas on the ground to ensure seamless connection between satellites.

Launching a satellite into space requires a very powerful multistage rocket to propel it into the right orbit. Satellite launch providers use proprietary rockets to launch satellites from sites such as the Kennedy Space Center at Cape Canaveral, Florida, the Baikonur Cosmodrome in Kazakhstan, Kourou in French Guiana, Vandenberg Air Force Base in California, Xichang in China, and Tanegashima Island in Japan. The U.S. space shuttle also has the ability to launch satellites.

Satellite communications use the very high-frequency range of 1–50 gigahertz (GHz; 1 gigahertz = 1,000,000,000 hertz) to transmit and receive signals. The frequency ranges or bands are identified by letters: (in order from low to high frequency) L-, S-, C-, X-, Ku-, Ka-, and V-bands. Signals in the lower range (L-, S-, and C-bands) of the satellite frequency spectrum are transmitted with low power, and thus larger antennas are needed to receive these signals. Signals in the higher end (X-, Ku-, Ka-, and V-bands) of this spectrum have more power; therefore, dishes as small as 45 cm (18 inches) in diameter can receive them. This makes the Ku-band and Ka-band spectrum ideal for direct-to-home (DTH) broadcasting, broadband data communications, and mobile telephony and data applications.

The International Telecommunication Union (ITU), a specialized agency of the United Nations, regulates satellite communications. The ITU, which is based in Geneva, Switzerland, receives and approves applications for use of orbital slots for satellites. Every two to four years the ITU convenes the World Radiocommunication Conference, which is responsible for assigning frequencies to various applications in various regions of the world. Each country’s telecommunications regulatory agency enforces these regulations and awards licenses to users of various frequencies. In the United States the regulatory body that governs frequency allocation and licensing is the Federal Communications Commission.