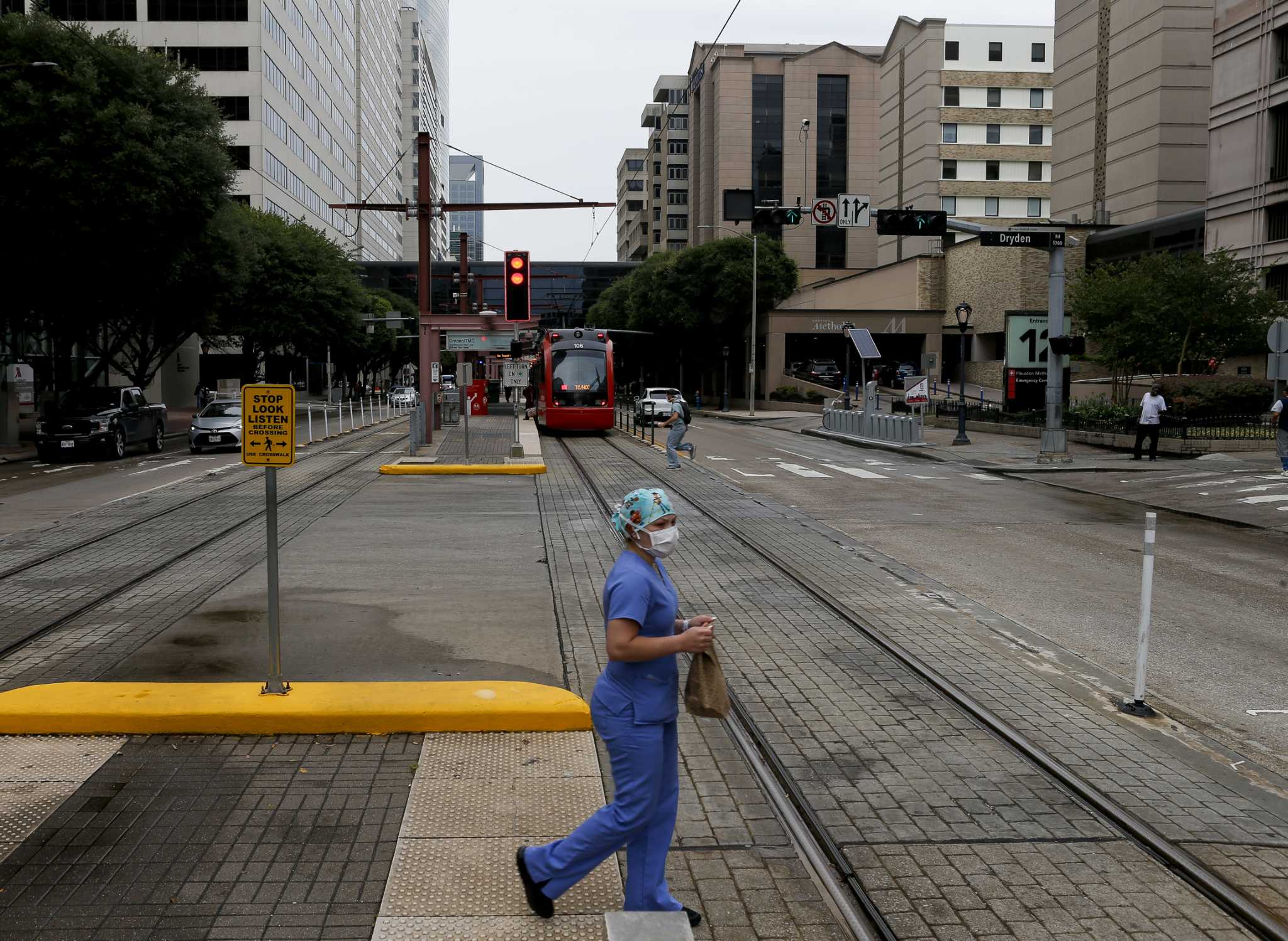 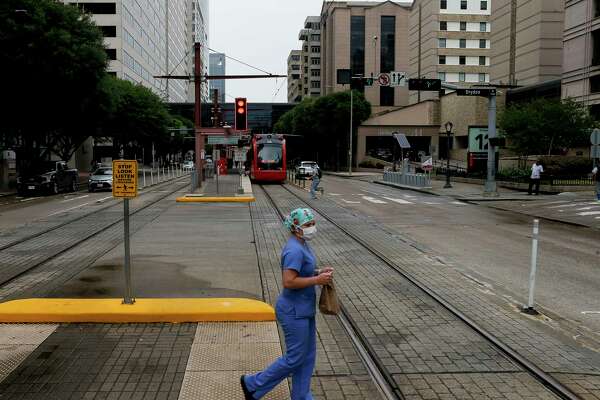 1of4A woman uses the crosswalk on Dryden Road in the Medical Center on Monday, June 22, 2020, in Houston. Texas Medical Center executives and Harris County health officials predict that as COVID-19 cases and hospitalizations continue to rise, the Houston area will effectively return to stay-at-home status as many businesses close due to sick employees.Photo: Godofredo A. Vásquez, Staff photographer 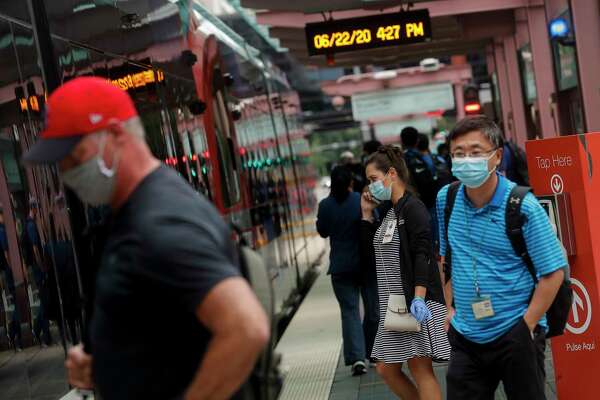 2of4People board a METRO train at the Dryden Road stop in the Medical Center on Monday, June 22, 2020, in Houston. Texas Medical Center executives and Harris County health officials predict that as COVID-19 cases and hospitalizations continue to rise, the Houston area will effectively return to stay-at-home status as many businesses close due to sick employees.Photo: Godofredo A. Vásquez, Staff photographer 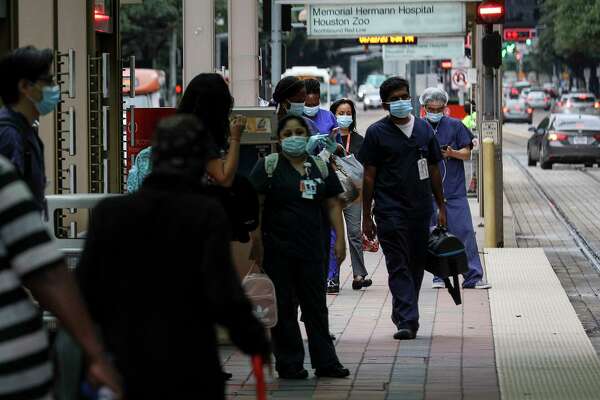 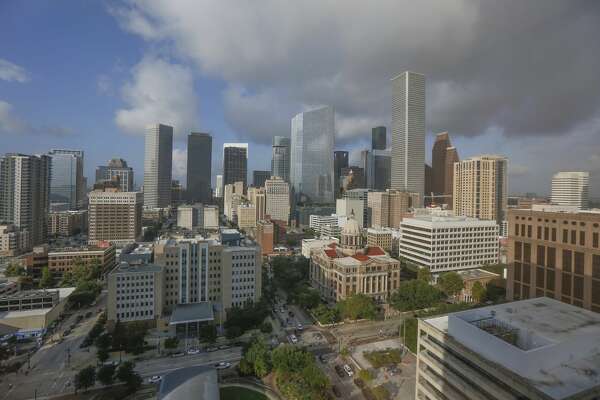 The number of COVID-19 hospitalizations in Texas continued to reach record highs over the weekend while new cases also climbed in the Houston area.

“My observations if this trajectory persists: 1) Houston would become the worst affected city in the U.S., maybe rival what we’re seeing now in Brazil 2) The masks = good 1st step but simply won’t be enough 3) We would need to proceed to red alert,” Hotez said Saturday on Twitter.

The World Health Organization on Sunday reported the largest single-day increase in coronavirus cases at more than 183,000 new cases in the latest 24 hours, according to news reports. The UN health agency said Brazil led the way with 54,771 cases, following by the U.S. at 36,617.

Texas on Sunday reported a 5 percent increase in hospitalizations, bringing the cumulative total to a record 3,409 patients — a figure that has more than doubled since Memorial Day. Also on Sunday, a batch of 2,726 new cases became the sixth-highest single-day increase in Texas, according to a Houston Chronicle analysis. Over the previous two days, the state reported its largest and third-largest single day increases, respectively.

The Houston region has experienced a similar trend with rising case figures. Houston Chronicle data shows that Harris County is averaging 610 new cases per day over the last week, compared to 313 new cases per day the previous week.

Hidalgo noted an increase in county hospitalizations last week when she issued her face covering order. Leaders of other Houston area counties continue to stay away from similar measures, despite concern from local health officials.

“Galveston County will not be issuing such an order,” Galveston County Judge Mark Henry said Sunday in a lengthy Facebook post. “Individuals and businesses need to take personal responsibility in following the recommended best practices in slowing the spread of COVID-19… If you find that a business doesn’t appear to have taken steps that have been recommended in Governor Abbott’s reopening plan, then don’t reward them by doing business with them. It’s that simple.”

Galveston County reported its highest single-day case increase on Saturday with 142 new cases, followed by 83 new cases on Sunday. More than half of its new cases have been reported after June 1, health officials say.

In a news release, the Galveston County Health Department said the “alarming” increase is related to a lack of social distancing, not wearing face coverings and spreading the virus in families and households.

“Galveston County is at a critical juncture,” the release said, adding, “The health district strongly recommends Galveston County businesses require patrons and employees to wear a face covering, and to make face coverings available for those customers who do not have one.”

Brazoria County also has seen a major uptick in new cases, reporting three of its largest single-day increases over the last four days. Health officials reported 52 new cases on Sunday, bringing the overall total there to 1,215.

Brazoria County Judge Matt Sebesta as of Sunday had not issued a mandatory mask order for businesses.

At the state level, the Texas Alcoholic Beverage Commission has joined the effort to curtail the spread of COVID-19 in businesses. The agency over the weekend suspended alcohol permits at a dozen bars, including two in the Houston area, as part of a statewide crackdown to enforcement Gov. Greg Abbott’s COVID-19 business restrictions.

Handlebar Houston and Barge 295 in Seabrook were issued 30-day permit suspensions for not implementing proper protocols to slow the spread of the virus, the agency said.