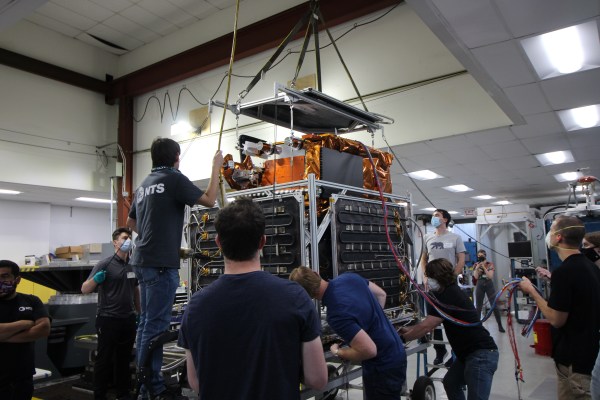 Satellite telecommunications startup Astranis has achieved a key technical milestone with its MicroGEO product, a small geosynchronous communications satellite that it will use to launch its first commercial service starting next summer for customers in Alaska. This is a big milestone for Astranis because the MicroGEO satellite test article that passed this round of thermal-vacuum qualification testing will serve as the basis for a whole planned line of first products, designed to affordably provide low-cost broadband to specific geographic markets using individual spacecraft, region by region.

Having already successfully met its technical requirements in terms of radiation, which is particularly powerful in the target orbital band where the Astranis MicroGEO will operate in a fixed position above the Earth, this means the startup’s tech has passed the last major technical milestone on its path to launch and operation. I spoke to Astranis CEO and founder John Gedmark about the achievement, and he said that while the MicroGEO qualification test article will still undergo a range of remaining tests ahead of its launch on a SpaceX rocket next year ahead of its planned Summer 2021 operational date, this is a big achievement that represents years of work from the team.

“It was a huge amount of work for the team, and I’m sure as you can imagine, these things do not do not come easy,” Gedmark said. “People maybe don’t understand just how extreme the temperatures are that a satellite has to operate within: We were doing testing all the way from 150 degrees Fahrenheit to -180 degree Fahrenheit. Just imagine that temperature swing on a big box of electronics.”

That is incredibly impressive, given that while they’ve improved significantly over the years, even modern consumer electronics can have challenges with much less extreme temperature swings. And qualification testing for equipment designed to work in space is actually done to a standard of both 20 degrees Fahrenheit hotter and colder than expected orbital temperatures, just to provide the equipment with a safe operational buffer. Temperatures can vary so wildly because the orbital environment lacks the insulating layer of the atmosphere, meaning it gets very cold when the sun is on the far side of the Earth, and extremely hot when the sun is shining directly on the spacecraft.

The Astranis MicroGEO satellites will operate in geostationary orbit (GEO), which means they’ll sit in a high orbit (higher than what’s known as ‘low Earth orbit’ or LEO, which you may have heard of because that’s where SpaceX’s Starlink satellites work). The GEO band is where existing satellite-based communication infrastructure operates today — but these consist of very large, mostly aging and expensive satellites that provide the backbone of networks, including those used for in-flight Wi-Fi and on cruise ships.

Astranis is outfitting its GEO satellites with much more modern telecommunications equipment, and making its spacecraft significantly smaller, too. The company is betting that it can deploy smaller GEO satellites much more affordably, in order to serve very specific geographies. Its first satellite will serve Alaska, as mentioned, through a partnership with existing satellite TV and internet provider Pacific Dataport. This is expected to triple the available bandwidth to the state, while keeping costs to customers affordable. After that, the goal is to continue to build and launch similar satellites to serve individual small to medium-sized countries, states and other regions.

This model differs significantly from what SpaceX and others working on LEO communications constellations are doing. Gedmark outlined the costs and benefits of both, and why he believes what Astranis is doing is likely the better fit in terms of business model and efficiencies for a small, young company to pursue.

“We’re huge fans of what some of these other companies are trying to do with LEO constellations — it’s just a very different approach,” he said “We have the ability to put up one satellite at a time and focus bandwidth right where it’s needed, and do that quickly. The smaller constellations, they are very much an all-or-nothing proposition — the entire constellation has to be in place to begin service. And then they have some other challenges ahead of them as well, like ground antennas, unique tracking.”

Gedmark notes that you need to deploy many gateway dishes all around the world in order for LEO constellations to be effective, which caries its own costs and risks. Astranis, however, is compatible with existing infrastructure already used in satellite-based internet and communications, making it much easier to get serving customers. Plus, since it can launch satellites individually to serve specific regions, it can add revenue in stages over time, whereas LEO networks will need an immense up-front capital investment before any money actually starts coming in from commercial customers.

“They certainly can be successful,” he said. “I just think it’s gonna take them some time and we’re optimized for speed. Whether it be a U.S. state like Alaska, or a small or medium-sized country, we can offer them some extra bandwidth they can use as soon as possible and, and get it to them at the right price.”