Mumbai:Ratan Tatarejected claims that his “personal letters of appreciation” toPallonji Mistry, father ofCyrus Mistry, can be regarded as evidence of a quasi partnership or any vested legal right in Tata Sons. The move by Cyrus Mistry, ousted as Tata Sons chairman in 2016, to seek “proportionate representation” on the Tata Sons board in the Supreme Court, based on these letters, is an afterthought since he had not done so in the original appeal filed in theNational Company Law Tribunal(NCLT) in 2016, a Tata confidant told ET.

The Supreme Court decided Friday to hear the cross-appeal filed by Cyrus Mistry over the ruling of the National Company Law Appellate Tribunal (NCLAT) along with the plea filed by Tata Sons challenging the December 2019 order of the tribunal in the apex court. In its appeal, the Mistry camp has sought proportional representation on the board of Tata Sons on the basis of the 18.4% stake held by the family-owned Shapoorji Pallonji Group. The Supreme Court has directed both parties to complete pleadings within four weeks.

There was no response to queries sent to the offices of Ratan Tata and Cyrus Mistry.

“These letters cannot be called ‘commitment’ or ‘agreement’ after 15 years,” said the person close to Tata. Cyrus Mistry had filed an application to place three letters written by Ratan Tata to Pallonji Mistry, who had served on the board of Tata Sons between 1980 and 2004, on the record in support of his claims. 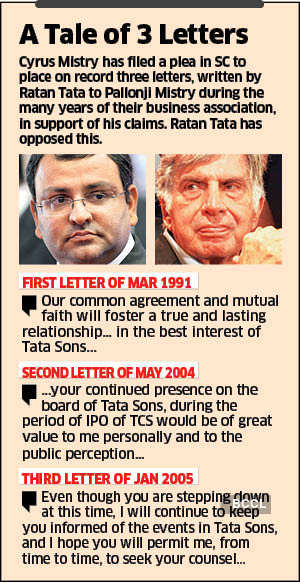 Allegations & Counter Allegations
The first letter was an informal one written in 1991, soon after Ratan Tata took over as chairman of Tata Sons. The second was written in May 2004 when Tata asked Mistry to continue as director of Tata Sons to ensure continuity in the midst of the ongoing Tata Consultancy Services (TCS) share sale. The third was an informal one in January 2005 that Tata wrote to thank the elder Mistry after he stepped down as director for his “support and confidence.”

“If this relief (proportionate representation) were to be granted to the Mistry family, the Supreme Court will have to rewrite the company’s Articles of Association,” the person close to Tata said.

Chairman emeritus Ratan Tata has also refuted claims regarding a Tata bloc and non-Tata bloc made by Cyrus Mistry in terms of shareholder representation. “There is nothing called a Tata bloc,” the person close to Tata said. The Tata Trusts are public charitable trusts, the Tata family owns less than 3% and the Tata companies are independent legal entities, the person said.

This person also said that Cyrus Mistry’s argument that his appointment was “inextricably linked” to his status as a shareholder was flawed.

MISTRY STANCE
However, officials close to Cyrus Mistry said when the two investment firms of the Mistry family—CIPL and SIPL—filed a petition citing mismanagement and oppression of minority shareholders in December 2016, they had board representation through Cyrus Mistry.

“It was only after the proceedings commenced that Tata Sons illegally removed Mistry as a director. In 2017, after the NCLAT had granted a waiver in favour of the Mistry family, and when proceedings resumed before the NCLT, the prayer for ‘proportionate representation’ was introduced to remedy the illegality effected by Tata Sons,” the person said.

“The Articles of Association of Tata Sons also don’t state that the minority shareholders should be oppressed. The Tata Trusts have been held guilty of violating the Articles of Association when they illegally removed Mistry,” the person said. The Companies Act under Section 242 (2) empowers the grant of any relief as a means to bring to an end the oppressive conduct and can extend to rewriting the Articles of the company to ensure equitable relief, the person said.

Executives close to Mistry said the Tata companies were not part of Tata Sons until the rights issue of Tata Sons in 1995.

“There were only two shareholder groups–the Tata Group represented by Tata Trusts and the SP Group. The rights issue was required to help increase the shareholding of Tata Sons in Tata Group companies,” said one of them. “It is important to note that the Tata Trusts could not subscribe to the shares of Tata Sons as they are legally prohibited from owning shares as mentioned above. It was only with the consent of the SP Group that the Tata Companies were allowed to become members of Tata Sons, so that the effective shareholding of the Tata Group did not get diluted.”

The Tata side’s contention reflects “a deterioration in standards and values that Tata claims to uphold,” said the person close to Mistry.

“In fact, one of the letters that Tata wrote to Pallonji Mistry states, ‘Our common agreement and mutual faith will foster a true and lasting relationship without any misunderstanding- and in the best interest of Tata Sons as a company. Our standing together will also be a matter of strength… In ending, let me re-iterate that I will never do anything consciously to hurt you or your family’.”

In June 2016, the nominations and remuneration committee of Tata Sons had given Cyrus Mistry a glowing performance feedback, which was endorsed by the full board of Tata Sons, said the person close to him.

“To date, there has been no proof or any evidence provided to show the grounds on which the board claims to have lost confidence. This is further reinforced by Tata’s own admission that it was the Tata Trusts that claimed to have lost confidence in Mistry… It is time to transparently disclose the governance at the trusts.”

NCLAT RULING
The NCLAT had ruled that the facts bear out acts of oppression and prejudicial conduct against minority shareholders and granted them relief, the person said.

Both the Tata Group and the Mistry side had challenged the December ruling of the National Company Law Appellate Tribunal (NCLAT) in the apex court. The Supreme Court had in January stayed the NCLAT order reinstating Cyrus Mistry as executive chairman of Tata Sons and restoring his directorships in the holding company as well as three group companies.

Suruchi Suri, partner at Suri & Company, said the case will determine whether relief could have been given to Cyrus Mistry by the NCLAT without striking down the Articles of Association of Tata Sons.

“The ruling will set a precedent in any event since the law has not been tested in this kind of an impact on minority shareholders as yet,” Suri said. “Several companies where minority shareholders don’t have any representations on the board currently would be keenly watching this case for future reference.”

Commenting feature is disabled in your country/region.